And you thought Week 17, following the Steelers 26-14 victory over the Browns at Heinz Field, was going to be the retirement party for long-time Steelers quarterback, Ben Roethlisberger.

Sure, Pittsburgh still had one more game to play in order to complete its 2021/2022 campaign, but that would be at Baltimore’s M&T Bank Stadium against the Ravens. 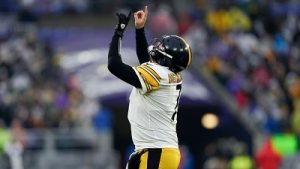 The Steelers still had playoff hope as they prepared for Week 18, but it sure didn’t seem like things would fall into place in yet another win-and-get-help regular-season curtain jerker.

But they obviously did, and when Chris Boswell connected on a game-winning field goal in overtime, Roethlisberger walked across the field as if he already knew he still had more football left to play.

Roethlisberger may have had to say goodbye to Heinz Field, his work home, a place that included thousands of vocal and emotional “work” friends who were eager to express their love for him, but saying goodbye to Heinz didn’t mean saying “Hello” to his “Life’s Work.” At least not just yet.

Judging by his decline in abilities over the past few years, it’s obvious that it’s time for Roethlisberger, the old cowboy, to ride off into the sunset.

But I think it’s fitting that Ben Roethlisberger, a quarterback who has never truly gotten his just respect when compared to other all-time greats at his position, will end his illustrious 18-year career in the postseason. After all, that’s where the great ones usually shine, and while Ben Roethlisberger hasn’t always been perfect in the playoffs, he’s had more ups than downs — including three trips to the Super Bowl and two Lombardi trophies.

The odds are long that the Steelers’ and Roethlisberger’s postseason journey will extend beyond this coming Sunday evening and the wildcard date with the two-time AFC-champion Chiefs at Arrowhead Stadium. Kansas City recently spent the allotted 60 minutes of regulation wiping the floor with the Steelers in a Week 16 matchup at the same venue, which may explain why the home team has already been established as a 13-point favorite.

But that die-hard fan in me, the same person who feels like he will cause the team to lose if he changes his routine even a little bit during “Playoff Week,” wonders if the Big Ben that we all remember has one final great game left in that aging right arm.

That would be glorious, wouldn’t it, Roethlisberger going toe-to-toe — and throw-for-throw — with Patrick Mahomes, the young gunslinger and, according to many, the very best in the game right now, for four full quarters?

A win would be ideal, but even in a loss, I think most Steelers fans would feel proud that Roethlisberger showed the football world one final time just how special he’s always been.

I think that would be a much better story.

Either way, Roethlisberger will end his career in the best possible place for him — the playoffs.