Taken from the grade book of a teacher beaming that his star pupil is going out in a blaze of glory, here is the Steelers Report Card for the overtime win over Baltimore in Ben Roethlisberger’s last game at M&T Stadium. 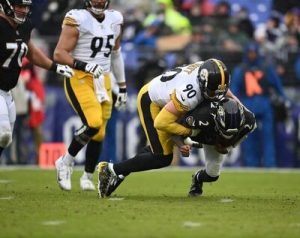 Quarterback
Ben Roethlisberger had a 49.2 passer rating for the first three quarters. By the end of overtime, it was 80.1. So it’s a glass half full, glass half empty situation right? Wrong. Five 3rd or 4th down conversions, one lead scoring 4th quarter drive and another overtime score fill the glass every time. Grade: A+

Running Backs
Najee Harris had 56 yards total yards from scrimmage, to the horror of Fantasy Football fans. To the delight of Reality Football fans, he started overtime off with a one handed catch – with his left hand – and finished it with a 15-yard romp that made the final field goal a gimmie — while carrying the ball with his left arm. (Still wonder why we drafted him?) Benny Snell better than his numbers but the drop off was noticeable. Grade: A-

Tight Ends
Pat Freiermuth missed a 3rd down conversion in regulation, but boy did he make up for it in overtime. He also did well blocking. Zach Gentry quietly caught 4 balls on 5 targets while blocking well. Grade: B+

Wide Receivers
Chase Claypool might have had his best day as a Steeler, and this is for a guy who had 3 TDs as a rookie. No, Claypool didn’t score a lot of points for Fantasy Football owners (see the trend), but he made hard gritty plays on the ground, catching the ball and blocking. Diontae Johnson had a good day catching 7 of 51 passes. Ray-Ray McCloud’s 4-37 might not seem like much, but boy, those catches counted. Grade: B+

Offensive Line
Ben Roethlisberger was only hit twice and sacked once – when can you say that after a Ravens game. While that was good, the run blocking wasn’t quite as solid has it had been against Cleveland. Grade: C

Defensive Line
Cam Heyward lead the team in tackles had a sack and another tackle for a loss. Chris Wormley got a sack and batted down a ball. Yet the Ravens still gained over 150 yards rushing with a 45 yard run and two plus 20 yard runs. Grade: B-

Linebackers
T.J. Watt had a sack and a hand in another that he wasn’t credited with. However, highly amateur film analysis suggests that linebacking lapses were at fault for the run defense woes. Grade: C+

Secondary
The Ravens were 3-14 on third downs and Tyler Huntly completed no passes in overtime. Cam Sutton’s interception in the end zone was a game changer, and Terrell Edmund’s pick, lucky though it was, positioned Pittsburgh for its first points. Arthur Maulet continues to come up strong in run support. Minkah Fitzpatrick pass defense of Marquise Brown with 31 seconds remaining is the season’s most underrated play. Grade: A

Coaching
Again, the Steelers offense remained stuck in third gear for 3 quarters and again did not find away out until Ben Roethlisberger took over. Is Roethlisberger just an adrenaline junkie? Have his skills eroded to the point where it takes a pressure cooker for him to deliver? Or is Matt Canada’s offense not suited for him? Or do the Steelers simply lack too many people in the trenches? Or is Canada just in over his head?

Outside of a few exceptions in October, the Steelers offense has only ever been effective late in games. Sixteen points in 5 quarters isn’t going to win you a lot of post season games in the NFL, but it was good enough to get Ben Roethlisberger to the playoffs.

With that said, credit Canada for using Chase Claypool to get the offense moving, which was critical on the touchdown drive.

Yes, the run defense lapses were real, but the Steelers coaches managed to make the right adjustments to neutralize that advantage down the stretch.

Beyond the X’s and O’s the attitude and the resiliency of this group of players is phenomenal. Yes, Ben Roethlisberger was the one throwing those 3rd and 4th down passes, but it takes a focused and ready receiver to catch them. 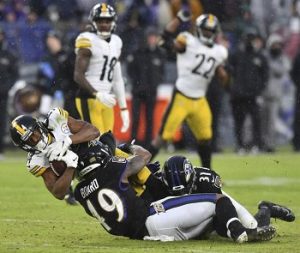 Ray-Ray McCloud comes down with it on 4th down. Photo Credit: Chaz Palla, Tribune-Review

It doesn’t just take special talent to learn how to carry — and catch — with your left arm in the middle of a season finale with the playoffs on the line, it takes a special attitude. The Steelers “smiled in the face of adversity” to use Mike Tomlin’s words, and he deserves the credit for setting that tone. Grade: A-

Unsung Hero Award
How did the Steelers rally start? With a big Ben Roethlisberger pass? No. With a defensive “Splash play?” No. With a running back ripping off a run? No. It was actually Ray-Ray McCloud’s 23-yard punt return that set the Steelers up at midfield. Steelers special teams also defended a fake punt attempt early that could have been a game changer. And of course Chris Boswell went 3 for 3 and for that the Steelers Special teams win the Unsung Hero Award for the win over the Ravens.