The Pittsburgh Steelers in a new era. With Ben Roethlisberger retired, the Steelers face a time of uncertain, risk and opportunity. Few choices are easy. Make the right decision on a quarterback, and Super Bowls could come soon. Err on the wrong signal caller and you set the franchise back for half a decade. 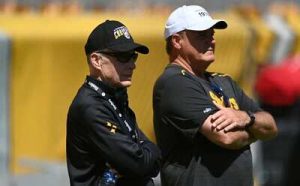 Fortunately, Art Rooney II, Kevin Colbert and Mike Tomlin do have a tool for mitigating risk, if not for creating opportunity.

A year ago, the Steelers faced salary cap Armageddon. They’d projected a salary cap increase in 2021 of around $20 million. Instead, thanks to COVID-19, it dropped by about $16 million. Players took pay cuts, the Steelers added voidable years and starters became cap casualties.

Instead struggling to get into cap compliance, the Steelers are staring at a cap surplus of at least $28 million and perhaps as much as $32 million. That number could grow. The Steelers could shed the salaries of underperforming Joe Schobert and seldom used Derek Watt. Stephon Tuitt could either retire or be cut.

Of course. As The Athletic’s Mark Kaboly reminds us, “…they could get that number to around $64 million with simple restructures of existing contracts, according to Over the Cap’s Nick Korte.” Ah, $64 million for Kevin Colbert to spend as he walks out the door.

No doubt, it is tempting. But restructuring is a temptation the Steelers are right to resist.

NFL Salary Cap dynamics are of little interest and/or go over the heads of most NFL fans. But the salary cap is a fundamental part of the NFL’s competitive structure and its “rich get richer” business partnership model.

This started in the 1990’s in part out of necessity. Locked in a bad lease at Three Rivers Stadium, the Steelers simply didn’t have the money to compete with the Jerry Jones and Eddie DeBartlo’s of the NFL.

And while the Steelers remained competitive, they also couldn’t afford to keep many good players – think Leon Searcy and Yancey Thigpen. In 2001 that changed when Heinz Field opened. And for the next decade and change, the Steelers kept almost everyone they wanted to keep.

That changed in 2011 with the new CBA, that ushered in several years of a near flat salary cap. Suddenly, contract restructures became a staple of necessity. Yet, when the cap began to rise again in about 2014, the Steelers continued making restructures.

But using contract restructures to create salary cap space is kind of like using one credit card to pay off another – sooner or later the bill comes due.

The Steelers were forced to eat a ton of dead money on LaMarr Woodley and Antonio Brown’s contracts thanks to restructures. And the Steelers sticky salary cap situation of a year ago was made all that more complicated Roethlisberger’s repeated restructures. 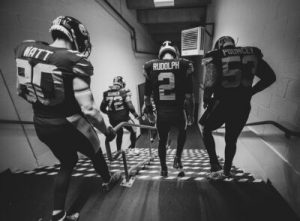 And if the determination is that guys like Scobert and Watt aren’t delivering good bang for their salary cap buck, then the Steelers should move on. The Steelers have holes to fill. There isn’t a slot on the depth chart that they can’t upgrade with the right free agent signing.

Do you draft a quarterback at 20 in 2022, or do you let the Mason Rudolph experiment run its course and maybe get a better quarterback lower in the 2023 NFL Draft?

But the Steelers do know and can control how they spend their money in March of 2022, and they should do so by sticking to sound salary cap management practices.