Such is the story of Steelers center/guard J.C. Hassenauer who is an Exclusive Rights Free Agent. 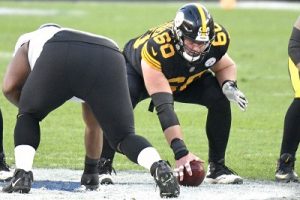 J.C. Hassenauer came to the Steelers in the summer of 2019 after going to training camp in 2018 with the Atlanta Falcons, playing in 4 preseason games and spending time on their practice squad. And it was on the practice squad he would stay through 2019 for the Steelers, until earning a promotion to the regular season roster for the season finale in Baltimore.

Hassenauer earned a spot on the 53 man roster in 2020, appearing in 15 games and starting four at guard beginning with the Steelers Tuesday win over the Ravens. In 2021 J.C. Hassenauer appeared in 13 games, starting one at guard and closing out the season with two starts at center, including Ben Roethlisberger’s final game at Heinz Field.

J.C. Hassenauer gives the Steelers strong, experienced position flexibility at center and guard. As an Exclusive Rights Free Agent there’s no risk in bringing him back for 2022.

The Case Against the Steelers Resigning J.C. Hassenauer

The Steelers fielded their worst offensive line in maybe a generation last year. They must exploit every opportunity for improvement. As Mike Tomlin says, free agency is “Free for them, free for us,” which is a polite way of saying that the team has the ability to shed itself of players who are “Below the Line.”

J.C. Hassenauer may not be terrible, if between free agency, the 2022 NFL Draft and the undrafted rookie free agent pool the Steelers can’t find a better number 4 guard and/or backup center then Art Rooney II needs to be replacing someone other than just Kevin Colbert.

While no one will ever confuse him with Dermontti Dawson, J.C. Hassenauer’s experience and ability to swing between center and guard are true assets. The Steelers line was in fact a tad bit better when Hassenauer took over for Kendrick Green to close the season.

They can both bring J.C. Hassenauer back, and improve their starters and other back ups at center and guard in free agency and the draft.