A fifth-round pick out of Penn State in the 2018 NFL Draft, Marcus Allen came to the Steelers as a hard-hitting safety who both the coaches and fans hoped would translate as a player at the professional level. With head coach Mike Tomlin now looking for defensive backs capable of playing the all-important dime linebacker role, Allen seemed like a player with the potential to be molded into a valuable member of the defense.

Unfortunately for Marcus Allen, his Steelers career hasn’t quite worked out that way. However, he is a former fifth-round pick, and with depth at a premium at several positions, is Allen worth giving another contract to? 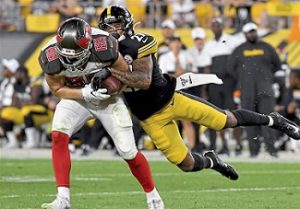 Capsule Profile of Marcus Allen’s Career with the Steelers

Despite making the team out of training camp, Marcus Allen played very little for the Steelers during his rookie season. He was waived the following training camp before being signed to the practice squad where he remained until being promoted to the active roster during the 2019 campaign.

The Case for the Steelers Re-signing Marcus Allen in 2022

Marcus Allen has seen his special teams duties steadily increase during his time with the Steelers and was in on 65 percent of the special teams snaps in 2021. Marcus Allen might not be a stalwart on defense, but there’s always room on a roster for a player willing to take on the duties of a special teamer.

The Case Against the Steelers Re-signing Marcus Allen in 2022

Marcus Allen was an exclusive rights free agent a season ago and inked a one-year deal for $850,000. When you consider the fact that a player’s salary increases each year due to time in the league, is Marcus Allen really someone the Steelers want to pay seven figures to just to play special teams and the occasional defensive snap?