The Steelers continue to fill holes on their coaching staff as they announced the hire of Pat Meyer as their new offensive line coach, which confirms that Mike Munchak will not be returning to Pittsburgh.

Like Frisman Jackson who joined last week as wide receivers coach, Meyer comes to Pittsburgh from the Carolina Panthers, but unlike Jackson, Meyer had been fired following the Panther’s 5-12 season. 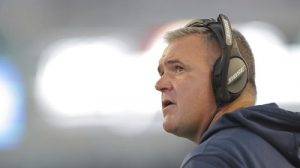 Prior to that, Meyer had several stints on the college coaching circuit that saw him make stops at Colorado State, Florida State, N.C. State and Memphis where he worked under Rip Scherer in 1999, just as Mike Tomlin had in 1996.

In announcing the move, the Steelers took great pains to highlight the success that San Dieg… er um, Los Angeles had in rushing the ball during Meyer tenure. And it is true that the Chargers ran the ball well while Meyer with them, although the Steelers effectively contained their rushing attack in their home loss in 2018 and their road win in 2019.

But that contrasts with Pro Football Focus ratings of his offensive lines, which were not good.

Pro Football Focused ranked the Panthers offensive line at 31st in the NFL last season. As Chris Adamaski of the Pittsburgh Tribune-Review reminds us, during 2021 “only one player started more than 10 games,” for the Panthers with no one starting all 17 games at one spot.

Seriously. Mike Tomlin’s coaching decisions have drawn a lot of heat over the last ten years, some of it justified, some of it hot air. But the truth is that when Mike Tomlin has brought outsiders on to his staff, the ones with established coaching track records have done better than his attempts to mentor and mold younger coaches.

The contrast between Richard Mann’s and Scottie Montgomery’s stewardship of the wide receivers room offers the best example. But you can also see it on offensive line. Both Jack Bicknell and Adrian Klemm were disasters with Shaun Sarrett also struggling, whereas Munchak transformed the line into an asset.

It is unfair to expect Meyer to reproduce Munchak’s magic, but to paraphrase Jerry Garcia, a touch of Grey suits the Steelers anyway.