You can tell Steelers fans aren’t used to their favorite football team being extremely active during the onset of the NFL’s annual free-agent frenzy. 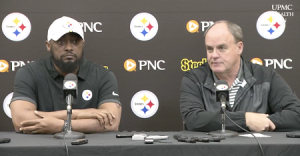 Kevin Colbert and Mike Tomlin in 2019.

Why do I say that? Because I think the fans want to elect Kevin Colbert, the team’s long-time general manager, king of Pittsburgh after he finally hangs up his executive badge for good following the 2022 NFL Draft.

What Steelers fans are experiencing so far is your normal free-agent activity that most teams have this time of year. This is what happens with actual cap space, something the Steelers haven’t had this much of since forever–after starting out with just under $30 million last week, they still have over $20.5 million according to Spotrac.

Maybe that’s why the signing of Mitchell Trubisky seemed like such a big deal when the news broke last week that they agreed to a two-year contract with the still fairly young quarterback. Perhaps this is why inking a deal with inside linebacker Myles Jack feels like a bigger coup than it actually is.

Make no mistake, though, while the Steelers have been a bit splashier than usual through one week of free agency, they’ve still been just as practical as ever.

Neither Trubisky or Jack is a perennial All-Pro player, but they’re both good enough that they represent upgrades over what we saw at their respective positions a year ago — sorry to break this news to the truly diehard Ben Roethlisberger fans out there.

I think even the most intense Steelers fan wouldn’t go overboard with the individual signings of guard James Daniels, center Mason Cole and cornerback Levi Wallace, but put them together with the Trubisky and Jack deals, and it feels like a time to celebrate and throw a parade.

But all Colbert did with these moves was make the Steelers better on paper at positions that needed to be upgraded, and he did this without breaking the bank in the process.

No deal that’s been signed so far has made you feel like the Steelers are mortgaging their future. No, they’re just quietly going about rebuilding their roster and reinforcing it with youth by bringing in guys on their second contracts, players who may still have their best football ahead of them.

Will all of these moves pan out? The odds and free-agent history say heck no, but some of them likely will. If it’s Trubisky, for example, wow, will the Steelers be in tremendous shape moving forward. But even if someone like Daniels steps in and becomes the anchor of an improved offensive line, the Steelers should be able to build upon that.

I like what the Steelers are doing. Am I worried about any free-agent grades and someone declaring the Steelers “winners”? Not really. I’m just excited about how these new players can collectively help the team expedite its rebuild.

The real winning is done in October and November, but I must say, it is pretty cool to see the Steelers do a little “winning” in March for a change.