Running back depth, or lack thereof has been the Achilles Heel for the Steelers during the latter part of the Ben Roethlisberger era. Just how bad has the problem been?

Well, consider that after their 2014 Divisional Playoff loss to the Ravens at Heinz Field, none of their top 3 running backs, neither Ben Tate, Josh Harris nor Dri Archer ever saw another NFL carry.

A year later, the Steelers went into the playoffs starting their 5th and 6th string running backs, Fitzgerald Toussaint and Jordan Todman. Thin running back depth hobbled the Steelers a year later in the AFC Championship loss to the Patriots, with Le’Veon Bell leaving early and DeAngelo Williams ineffective.

In 2021 the staffed quantity on the depth chart behind starter Najee Harris and that included Kalen Ballage. Did he show enough quality during that time to earn a second contract? 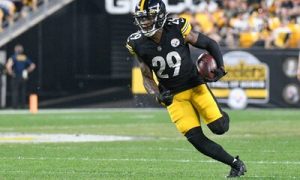 Capsule Profile of Kalen Ballage Career with the Steelers

Kalen Ballage came to the Steelers as a former Miami Dolphins 4th round pick who’d bounced around to four teams in his first 3 years in the NFL. Ballage earned a spot in training camp at least in part due to an injury to Benny Snell.

Kalen Ballage seemed like the “next man” up after Harris, but the record shows he only had 12 carries and only saw 65 offensive snaps. That was good for 36 yards in 12 carries along with 2 catches on 7 targets. If the offensive line didn’t give him a of help, Ballage did little to help himself in spot duty.

The Case for the Steelers Resigning Kalen Ballage

Yeah. This is a tough one. The Steelers need depth behind Najee Harris and Ballage gives them a veteran presence. And he’s only fumbled twice in four years in the NFL. And you can get him dirt cheap. Plus he played 20% of special teams snaps.

The Case Against the Steelers Resigning Kalen Ballage

If you’re not convinced by the above you shouldn’t be. Kalen Ballage was a bargin-basement free agency signing for a reason. His limited sample size has been large enough and representative enough for the Steelers to see what they have in Ballage and that is: Not much.

Curtain’s Call on the Steelers and Kalen Ballage

A key priority for the Pittsburgh Steelers in the 2022 off season is finding not only a number 2 but a number 3 running back to work behind Najee Harris.

It says here that, unless the Steelers stumble on the next Tom Brady with of their 6th round pick (ooh, wouldn’t that make the Melvin Ingram experience worth it), Pittsburgh will not field a Super Bowl team in 2022. But its still instructive to remember that the last time the Steelers won a Super Bowl, its running backs depth chart was four players deep.

The point isn’t that Kalen Ballage isn’t even 2022’s version of Mewelde Moore, it’s that he’s not even Gary Russell.

Expect the Steelers to move on.