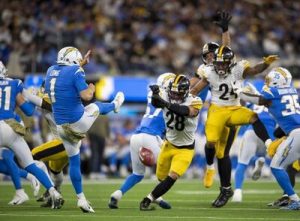 Capsule Profile of Killebrew’s Career with the Steelers

Miles Killebrew came to the Steelers a year ago with the sort of hybrid safety-inside linebacker peidgree that Mike Tomlin has taken a liking to of late. Although he was playing for more than the veteran minimum, he was clearly a product of free agent bargain hunting along the lines of Brice McCain and Darrius Heyward-Bey

And like Darrius Heyward-Bey, Killebrew earned himself a roster spot for the Steelers by playing on special teams.

In that role Killebrew excelled, blocking punts in the Steelers upset win over the Bills and sparking a near comeback with a punt block against the Chargers.

Killebrew saw action in all 17 games, playing sparingly, at on defense where he only logged 44 snaps. (He did combine with Terrell Edmunds for a tackle for loss in the Steelers loss to the Vikings.)

The Case for the Steelers Resigning Killebrew

Special teams is as much about want-to is it is about talent. And teams need quality special teams contributors and while those roles are best played by rookies earning their stripes veteran leadership and the example that sets is critical.

The Case Against the Steelers Resigning Killebrew

The Steelers list Killebrew as a safety with Terrell Edmunds unsigned and free agency starting Monday and depth behind Minkah Fitzpatrick perilously thin, the Steelers can’t really afford to devote a roster spot to a veteran “safety” who is really only special teamer.

That’s a roster spot and 2 million dollars salary cap space that the Steelers can’t use to plug one of their myriad holes.

Curtain’s Call on the Steelers and Killebrew

Resigning Miles Killebrew to a veteran minimum contract would have been a low risk or even no risk move for the Steelers.

Kevin Colbert and Mike Tomlin have doubled down and given Killebrew far more than the vetean minimum.

That’s a bit of a risk, but a small one and more importantly, a wise one. While it is unfair to expect Killebrew to block punts every season, his two blocked punts in 2021 show that he’s a dynamic player, and stocking their special teams with dynamic players is one of the ways the Steelers can win while they search for their next franchise quarterback.

Welcome back to Pittsburgh Miles Killebrew.