Pittsburgh rarely does practice squad poaching. When they do, it is out of desperation. Think Deon Cain and Kerrith Whyte during 2019. “Desperation” accurately describes the Steelers 2021 defensive line, which caused Kevin Colbert to grab Montravius Adams from the New Orleans Saints practice squad.

That happened in late November, but that was sufficient for Montravius Adams to start 4 games with the Steelers. Did he do enough to get invited back? 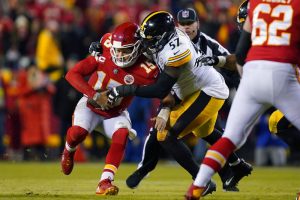 Capsule Profile of Montravius Adams’ Career with the Steelers

The Steelers signed Montravius Adams and started him in their home game against the Ravens, and Adams contributed to a strong defensive effort that neutralized Lamar Jackson.

Adams would start 3 more games for the Steelers and appear on one more, only missing their home win over the Titans. That was enough for 8 tackles, 1 tackle for a loss and 3 quarterback hits as Adams played in 48% of the possible snaps.

During the playoff loss to the Chiefs, Adams played 42% of the snaps, and sacked Patrick Mahomes for a 10 yard loss on Kansas City’s opening drive of the second half.

The Case for the Steelers Resigning Montravius Adams

Montravius Adams may not have fooled anyone into thinking he was the second coming of Tyson Alualu let alone Stephon Tuitt, but he came in off the street and became an immediate starter. Moreover, he pushed Isaiah Buggs off the team.

The Steelers had had their eye on Adams and he can provide cost-effective defensive line depth where it is sorely needed.

The Case Against the Steelers Resigning Montravius Adams

The Steelers run defense might have been marginally better with Adams in the lineup, but the operative words are “might” and “marginally.” The Vikings ran for 242 yards and made it look easy while the Ravens closed the season rushing for 249 more.

Curtain’s Call on the Steelers and Montravius Adams

Montravius Adams is a third round pick from the 2017 NFL Draft and is now on his third NFL team. He did play 4 years with the Green Bay Packers, but only started 3 games and didn’t get a second contract.

Does that mean he’s a lost cause? No, not necessarily.

The fact that Adams was able to step in off the street and contribute something to a defense that was struggling shows he has some skills. While he’s not “starter capable” nor does he likely have much “upside” at this stage of his career, he is someone who can provide depth and do so at an affordable second contract.