The Steelers second official move in free agency amounted to a bit of a surprise. After locking down special teams ace Miles Killebrew down to a 2 year contract, the Steelers followed suit with another 2 year contract for Arthur Maulet, seemingly giving him a respite on being a roster bubble baby. 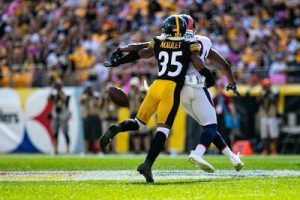 Capsule Profile of Arthur Maulet Career with the Steelers

A quick look at his transaction history on Pro Football Reference reveals that Arthur Maulet has been a roster bubble baby throughout his entire NFL life. That did not change when he arrived in Pittsburgh, joining the Steelers after the 2021 NFL Draft, getting cut in late August, only to return to the regular season roster before opening day.

Roster bubble baby or not, Maulet quickly worked himself into line up of the Steelers secondary, playing in 15 of 17 games. Maulet struggled at times, giving up a few key plays in the Steelers game against the Bears. As the season progressed, Maulet stepped up and provided run support when it was sorely needed.

He also forced a fumble against the Titans that Minkah Fitzpatrick recovered and the Steelers converted into their only first half points for a 19-13 point win.

The Case for the Steelers Resigning Arthur Maulet

Arthur Maulet is never going to build a sexy ESPN highlight reel. But he’s shown that he can be a serviceable defensive back in a unit that needs stability. He also came up strong in run support, and the Steelers need all the hlep they can get in stopping the run.

Terms of the two year deal haven’t come out, but you can imagine its not much higher than the veteran minimum.

The Case Against the Steelers Resigning Arthur Maulet

Joe Haden, Terrell Edmunds and Ahkello Witherspoon are all free agents. And while its possible that some of them will come back, free agency is 24 hours away. The faster the clock ticks towards 12:00 March 14th, 2022, the more likely all three are to leave Pittsburgh. The Steelers still have James Pierre under contract. He might some “upside,” but are you comforted with the thought of him as the proverbial “next man up?”

Maulet might have been a respectable role player in a secondary featuring established playmakers, but remove those playmakers and Maulet becomes someone that teams exploit early and often.

Curtain’s Call on the Steelers and Maulet

Success in the salary cap era hinges on finding players that provide the biggest bang for the smallest salary cap buck.

In 2021 Kevin Colbert did some bargain hunting and found Arthur Maulet, and Maulet delivered decent value. In this writer’s humble opinion, Maulet figured to be the type of player the Steelers could wait to sign and bring back after the draft.

But Kevin Colbert and Mike Tomlin have decided differently. And so they should. Maulet might not be a superstar, but he did log 33% of defensive snaps and another 33% of specials teams snaps. That shows he can be a role player and you need those on your roster.

If the Steelers still want to bring back Arthur Maulet after that draft, he’ll likely be available.