What price can you put on special teams ball security? I don’t have the answer. But the Pittsburgh Steelers decision to let Ray-Ray McCloud walk to San Francisco while replacing him with Gunner Olszewski will come to the difference between 0.25% and $6,200,000.

Success in the salary cap era comes down to getting the biggest bang for your salary cap buck. Ray-Ray McCloud handled the Steelers return duties for the last two years. Ray-Ray did a good job, but he wasn’t going to remind Boomers and Generation Xers of the return men of yore. 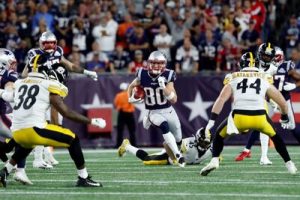 Think of guys like Mel Gray, or to keep this Steelers centric, Rod Woodson or Dwight Stone. Actually, Stone’s return numbers with the Steelers weren’t that great, but as Tony Defeo reminded us, he deserves to be remembered for more than his “Hands of Stone.”

Actually, stony hands or lack thereof is what the Steelers decision between Ray-Ray McCloud and Gunner Olszewski comes down to.

Gunner Olszewski, who began his career against the Steelers 2019 season-opening loss to the Patriots, has a 23.2 yard kick return average and an 12.6 yard punt return average. He also has more a touchdown on one his punt returns, something McCloud hasn’t been able to do.

The San Francisco 49ers signed McCloud to a 2 year, 10.6-million dollar contract (good for you Ray-Ray, mange it wisely, and you’ll have financial security for life, even if you only play for one season.) The Steelers deal Olszewski with is also for 2 years, but for only 4.2 million dollars.

Taken at face value, Kevin Colbert appears to have gotten the same thing for 6.4 million less.

And that’s 0.25%. During his 2 years with the Steelers, Ray-Ray McCloud fumbled 6 times on 130 returns. That gives him a fumble rate of 4.6%. In three years with the Patriots, Gunner Olszewski fumbled the ball 5 times on 107 returns, giving him a 4.85% fumble rate.

So the Steelers calculation is that 0.25% greater chance of a fumble is worth the 6.4 million dollars in salary cap savings. (This ignores Ray-Ray McCloud’s serviceable skills as a backup wide out – something that Gunner Olszewski has yet to prove.)

However, when you factor in that but 3 of Gunner Olszewski’s fumbles came in 2021, should Gunner Olszewski fumble a return the 4th quarter fumble of a close game, that 6.4 million could seem like a bargain.