Is there a single position that’s more important to the Steelers defense than outside linebacker? It is hard to argue to the contrary. In 2019, Pittsburgh’s defense returned to elite status thanks to the late blooming emergence of Bud Dupree.

And you can pinpoint the moment the unit lost elite status to Dupree tearing an ACL during the 3rd quarter of the December 2nd 2020 “win” over the Ravens.

During the latter part of 2021, Taco Charlton served as the “next man up” at outside linebacker for the Steelers. Does his tape warrant him staying in Pittsburgh for another season? 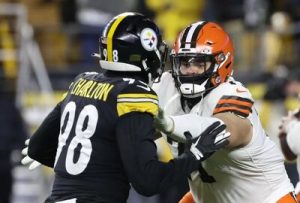 Taco Charlton was a decorated outside linebacker at Michigan and a prospect often linked to the Steelers in the months prior to the 2017 NFL Draft. Charlton was selected with the 28th overall pick by the Dallas Cowboys, who were drafting just two spots ahead of Pittsburgh.

The Case for the Steelers Re-Signing Taco Charlton In 2022

Despite having just 11.5 career sacks to his name, there’s no question Charlton has a great draft pedigree and is quite talented. Depth at outside linebacker was an issue in 2021 and it reared its ugly head multiple times, as both T.J. Watt and Alex Highsmith missed time. The Steelers paid Charlton $550,000 in 2021, and if they can get him for around that amount in 2022, I see no harm in bringing him back, even for just one more season.

The Case Against the Steelers Re-Signing Taco Charlton in 2022

As a recent first-round pick, Charlton may still have designs on being a starter in the NFL. While certainly not on the same level in terms of accomplishment, do the Steelers want to bring back Charlton and have a repeat of the messy situation that developed with veteran Melvin Ingram, who apparently was unhappy with playing time?

Curtain’s Call on the Steelers and Taco Charlton in 2022

To tell you the truth, I really can’t think of a legit case against bringing back a player like Charlton in 2022. He’s the proverbial low-risk, high-reward player, and if the Steelers can flesh out the talents that made him a first-round pick five years ago, everyone wins.