“Street free agents” captures that status of this class of player perfectly. They’re literally guys on the street waiting to be signed. Kevin Colbert has excelled in his street free agent signings, which in 2021 included Trai Turner.

After one year in Pittsburgh, is Trai Turner’s tape worthy enough to consider him enough of a Colbert success to  keep him in Pittsburgh? 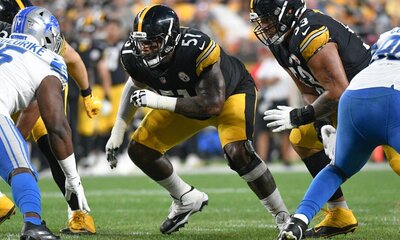 Capsule Profile of Trai Turner Career with the Steelers

When injures forced David DeCastro from the game last June the Steelers were left scrambling. To fill his shoes they signed Trai Turner, a former 3rd round pick from the Carolina Panthers who’d played in 2020 for the San Die… er um Los Angeles Chargers.

Trai Turner brought 89 starts and 94 games to the Steelers offensive line – which gave him more experience than the rest of offensive line combined. Turner helped steady the line starting all 17 games and provided veteran leadership to a young group that was getting a baptism by fire. How do we know this?

Well, any Steelers lineman that gets ejected for in a game against the Raiders clearly has his heart in the right place. 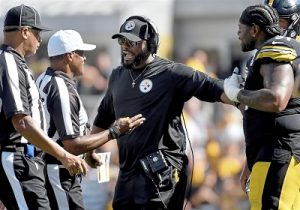 The Case for the Steelers Resigning Trai Turner

The Steelers need experience on the offensive line. That much is evident. Turner provides that. He made 17 starts in 2021 and appeared in 92% of offensive snaps. You literally cannot buy that type of stability.

The Case Against the Steelers Resigning Trai Turner

You might not be able to buy offensive line stability, but you certainly can buy better pass protection. Steel City Insider’s Roy Countryman cited a Pro Football Focus stat that had Turner giving up 8 sacks. And if you find that number unconvincing take a look at this:

Sheldon Richardson untouched for the #Vikings 5th sack of the day pic.twitter.com/SA8mspWZU7

Turner wasn’t the only party responsible here, but there were other equally egregious examples. The Steelers can improve their line with a little addition by subtraction and let Turner walk.

Curtain’s Call on the Steelers and Trai Turner

With between 28 and 32 million dollars in salary cap space, the Steelers are almost certain to use that to sign an offensive lineman or two. Trai Turner was a pretty good pickup for a team that needed a starting guard in late June, but clearly the Steelers can, should and will upgrade the position.