For almost a decade Ramon Foster, Maurkice Pouncey and David DeCastro provided stability for the Steelers at guard and center. In the span of just over 15 months, all three have proceeded to their “Life’s Work.”

Accordingly, the Steelers have invested both draft capital and made priority free agent signings since then. How have these investments impacted the Steelers interior lineman needs going into the 2022 NFL Draft. 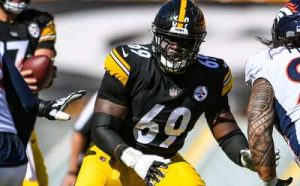 Steelers Depth Cart at Center and Guard: The Starters

The Steelers entered uncharted waters in 2021 when they drafted Kendrick Green in the 3rd round and essentially installed him as a starter. Mike Tomlin has never been a head coach whose wont to anoint rookies, yet he did that with Green.

Green had his moments at center, but struggled down the stretch and found himself replaced by J.C. Hassenauer for the final 3 games of 2021.

The Steelers starter at right guard during 2021 was Trai Turner, an emergency free agent signing to replace David DeCastro. Turner brought attitude to the position, as evidenced by his ejection against the Raiders, but the Steelers have made no attempt to resign him.

To take his place the Steelers signed James Daniels, who brings 54 games and 48 starts worth of experience to the left guard position. Officially Kevin Dotson is the Steelers other starter at guard. Dotson won the starting job in 2020 and flashed potential as a bright spot, but disappointed coaches during the 2021 training camp.

Still, the offensive line appeared to be broaching respectability at midseason in 2021 until Dotson went out injured.

The Steelers have given themselves options at in the middle of their line. They signed Mason Cole, who brings starting experience at center and some experience at guard. They also have John Leglue who started 5 games at right guard. Exclusive rights free agent J.C. Hassenauer has signed his tender and will return to Pittsburgh.

The Steelers also have “General” Joe Haeg who can do spot duty at guard.

The Steelers off season strategy at center and guard has been clear – cover your bases while keeping your options open. James Daniels appears to be set as one of their starting guards while Green, Cole and Dotson appear poised to fight for the starting center and guard positions.

The loser will provide depth, with the Steelers have several other backups who boast starting experience.

The adage goes that you can never have enough good starting offensive lineman and should they get a chance to draft another Alan Faneca or David DeCastro type guard let alone another Mike Webster or Dermontti Dawson type center, they should by all means draft him.

But that would be true in almost any year, and in 2022 the Steelers draft needs at center and guard should be considered Moderate-Low.