A generation from now, will we remember Kevin Colbert’s final draft as the night the Pittsburgh Steelers found their franchise quarterback? Will this be the evening where he tried to go out with a bang and flopped instead? Or will we recall how Kevin Colbert convinced Mike Tomlin not to force things and instead drafted a future Hall of Famer at another position?

Those questions will take years to answer.

As of now, the pundits and tea leaf readers argue that the Steelers brain trust is sold on picking Malik Willis, Kenny Pickett, Matt Corral or Desmond Ridder should one be on the board when the clock strikes 20.

That may be the case. Mike Tomlin has never been coy about pre-draft crushes. His love for Lawrence Timmons, Maurkice Pouncey, Jarvis Jones (ugh), and Najee Harris was well-known long before their names reached commissioner’s desk.

Would picking Pickett, Willis, Corral or Ridder at 20 and/or trading up to get him violate rule number 3 on the Steelers Road Map for Return to the Super Bowl i.e. don’t force finding a franchise quarterback?

But I can opine on what the Steelers needs are in this draft.

Over the past few weeks, with Tony Defeo’s help, we’ve broken down the Steelers needs at each position. Using the Steelers Draft Needs, we’ve clustered their needs into four tiers.

Wide Receiver and Defensive Line clock in at High-Moderate. In other words, a guy Pittsburgh picks there could very well end up starting.

Below that we have a log jam, with Quarterback, Running Back, Inside Linebacker, Outside Linebacker and Cornerback all coming in at Moderate High. In other words, the Steelers aren’t looking for a 2021 starter here, but that could change fast.

Next, we have Offensive Tackle and Safety. The Steelers should be OK here, but could go looking for a future starter.

Finally, we have Tight End and Center/Guard aka “interior lineman,” where the Steelers really are looking for depth.

So how to sort out the pecking order, given that we’ve got apparent ties at several positions?

Here is how I see the Steelers needs playing out: 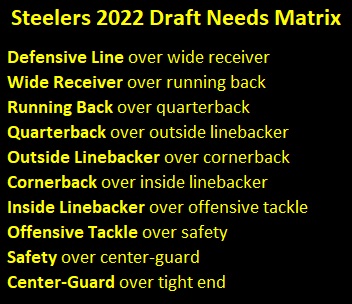 The same rational holds at running back over receiver. The Steelers need more at running back than Benny Snell and Anthony McFarland, but they’re superior to any backup wide outs.

The fact that the Steelers have Mitch Trubisky and Mason Rudolph and only one Najee Harris is why running back is edges out quarterback. Quarterback comes in over outside linebacker because that’s a more important position, but frankly that’s close because the drop off in proven talent behind T.J. Watt and Alex Highsmith is steep.

Likewise, the Steelers have appear to have 3 starter caliber cornerbacks, plus James Pierre, but they have more bodies at inside linebacker, even if there are long term questions about Devin Bush and no “starter in waiting” behind him and Myles Jack.

Inside linebacker is a higher priority over Offensive Tackle because the Steelers have two starters under team control for at least 3 years, and Joe Haeg can provide depth. But again, this is close.

Tackle edges out safety because both Minkah Fitzpatrick and Terrell Edmunds are far more proven commodities than any of the tackles, and Tre Norwood has far more “upside” than Haeg.

Center-Guard comes out as a higher priority than tight end simply because Pat Freiermuth and Zach Gentry are better, more known commodities than any of the interior lineman.

No, Steelers Mustn’t Draft for Need

With that said, the Steelers Draft Needs Matrix is anything but a call for Pittsburgh to pick based on need. When you draft for need, Artie Burns happens.

In other words, if the Steelers can grab a play making outside linebacker who could push Alex Highsmith to the bench, by all means they should grab him. Nor should they pass on picking the next Heath Miller let alone a Gronk clone just because Gentry looked good last year.

No, the Draft Needs Matrix seeks to show where the Steelers roster needs the most help and whom they should pick if all other things are equal.

The 2022 NFL Draft will be no different, and to the young men who will hear their names called in next three days, we congratulate them on their chance to live the dream that each of us had from the first moment we touched a Nerf football and barked out a snap count!