The receiver position has long been considered one the Steelers have excelled at in terms of drafting players, developing them and getting decent-to-great production out of those players.

It might be right now, thanks to so many free-agent defections this spring. But are those defections enough to make the position a high priority heading into the 2022 NFL Draft? 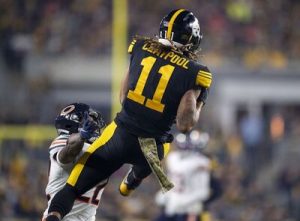 With JuJu Smith-Schuster, Ray-Ray McCloud and James Washington all defecting as free agents this spring, the Steelers currently have two legitimate starters on the roster. Diontae Johnson, the fourth-year man out of Toledo who caught a career-high 107 passes for 1,161 yards and earned his first trip to the Pro Bowl in 2021, is one. Chase Claypool, who regressed a bit last season after a rather-spectacular and explosive rookie campaign, is the other. Beyond that, it’s anyone’s guess as to who’s going to fill the role of slot receiver in 2022.

Anthony Miller, a second-round pick by the Bears in 2018, is currently listed as the starting slot receiver on the Steelers’ depth chart. Miller had some promising years in Chicago before being traded to the Texans prior to the 2021 season. After being released by Houston last October, Miller was signed to the Steelers practice squad before being promoted to the active roster in late November. Miller caught just one pass for two yards for Pittsburgh last season and has 140 receptions for nearly 1,600 yards and 12 touchdowns during his first four seasons in the NFL.

Cody White, a 2020 undrafted free agent out of Michigan State, showed a flash of promise a season ago. Tyler Vaughns, Steven Sims and Rico Bussey, three totally unproven players, round out the receiver depth chart, while Gunner Olszewski, a free-agent pickup from the Patriots, has just been a return specialist, albeit a relatively successful one, up to this point in his career.

With little in proven depth behind both Diontae Johnson and Chase Claypool, the Steelers could certainly use an infusion of talent at the receiver position.

And let’s not forget that neither Johnson or Claypool has truly established himself as a sure-fire number one receiver in the NFL.

Factor in the conventional wisdom that the 2022 NFL Draft appears to be flush with quality prospects at the receiver position. All things considered, I’d say the Steelers’ draft need at wide receiver is High-Moderate.