Steelers head coach Mike Tomlin loves blood lines. He added T.J. Watt in 2017 and Terrell Edmunds in 2018. By 2020 their brothers Derek Watt and Trey Edmunds were both playing for the Steelers.

Now he has a shot at doing it again, as the Pittsburgh Steelers have drafted Connor Heyward, a tight end out of Michigan State, younger brother of Cam Heyward and son of the late, great University of Pittsburgh star Craig “Iron Head” Heyward. 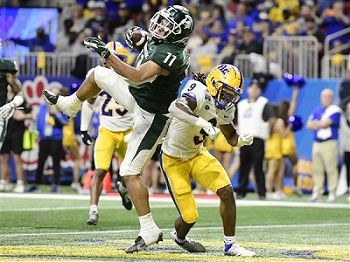 When asked if he consulted Cam Heyward as a reference for Conner, Steelers tight end coach Alfredo Roberts replied, with good cheer, “I don’t mess with Cam” multiple times. When asked about the importance of bloodlines, Roberts rebuffed the idea a little, explaining, “Connor holds his own. Getting drafted into the NFL is a big deal.”

Roberts said the Steelers were attracted the Heyward because of his ability to make plays down the field or at the line of scrimmage clarifying that Heyward has “the want to and the savviness to do some other things that are really attractive to us.”

When asked of Heyward’s versatility made him similar to Derek Watt, Roberts agreed that the two player’s skill sets are similar, but cautioned that Watt is more of a “pure fullback” whereas “Connor gives you a different flex and tight end responsibilities.”

Pat Freiermuth and Zach Gentry roster spots are set, so assuming both stay healthy, the battle for the 3rd tight end spot will be between Kevin Rader and Heyward.