Just days shy of the 2022 NFL Draft find the Pittsburgh Steelers with 3 safeties on their roster who were first round picks.

So, then it must be safe to say that safety is not a priority for Pittsburgh in the draft? Not so fast. 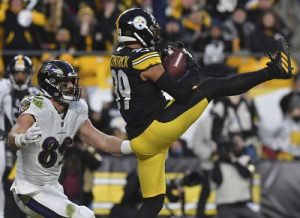 That single word precisely defines the arrival in Pittsburgh of both the Steelers starting safeties. The Steelers opened the 2018 NFL Draft by shocking the pundit class by picking Terrell Edmunds out of nowhere.

And if it is true that Edmunds hasn’t delivered the level of splash play that you’d expect from a first round pick, he has started for four straight years, missing only one game. Moreover, Edmunds has gotten better with each passing year.

The fact that Edmunds was on the free agent market over a month is a little bit surprising, as is the 2.5 million dollar deal he signed to return – which is less than what Marcus Allen and Robert Spillane are getting.

If drafting Terrell Edmunds was a shock in the spring of 2018, then trading 2020’s first round pick – after knowing that Ben Roethlisberger faced major elbow surgery – to acquire Minkah Fitzpatrick was a super charged shock.

It didn’t take long to see why Art Rooney II broke from 50 years of franchise tradition in trading away a first round pick, as Minkah Fitzgerald had an interception in his first game as a Steeler. During the 2019 season, Fitzgerald arguably changed the course of 3 if not 4 games in the Steelers favor.

Critics have said that Minkah Fitzpatrick had an off year in 2021. Its true. His “Splash” play count was down. But the Baltimore Ravens come to Heinz Field and go the length of the field and you have a player who can kill a drive with an end zone interception, are you really going to complain?

What wasn’t captured in Minkah’s stats were things like the critical third down stops he made time-and-time again. If you’re really looking to understand his value to the team, look at his tackle count: It jumped from 79 in 2020 to 214 in 2021.

That’s because in a year of a historically bad run defense, Minkah Fitzpatrick served as the last line of defense time and time again.

The other first round pick the Steelers have at safety is Karl Joseph, although he is not the primary backup at the position. Joseph was signed by the Steelers at the end of summer and played on their practice squad for most of 2021.

The primary backup at safety is Tre Norwood, the player whom the Steelers drafted in the 7th round of the 2021 NFL Draft. That 7th round status didn’t deter Mike Tomlin from labeling him as a “Swiss Army Knife.”

Tomlin was true to his word. Tre Norwood appeared in all 17 games for the Steelers, logging 33% of the defensive snaps, making 1 interception and defending 4 passes during the season. Indeed, it was Tre Norwood who picked off a Minkah Fitzpatrick deflection against the Browns that allowed Ben Roethlisberger to close his career at Heinz Field in the victory formation.

Veteran Miles Killebrew is also technically a safety, but only logged 44 defensive snaps last year, playing mostly on special teams. Donovan Stiner is also on their roster after having signed a futures contract.

A week ago mock drafts that showed Pittsburgh picking Michigan’s Dax Hill were completely plausible. The Terrell Edmunds signing changes that equation, but only so much.

The Steelers will certainly target Minkah Fitzpatrick for a mega extension this summer, but what about Edmunds?

The critical question is, was a one-year deal Edmunds’ idea, or did the Steelers offer him say, a 2-year deal worth 8 million? Even if the Steelers do remain interested in Edmunds long term, there’s no guarantee they wouldn’t end up seeing him leave just as JuJu Smith-Schuster did.

So while we shouldn’t expect the Steelers to use one of their premium picks on a safety, it certainly would be a shock if they did.

With that said, the Steelers need at safety going into the 2022 NFL Draft should be considered as Moderate.