But at least the Steelers are officially at training camp and preparing for the 2022 regular season, which will be upon us in approximately six weeks.

Can you believe the Steelers are actual 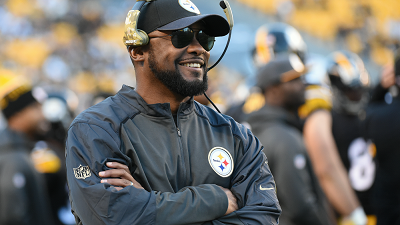 Steelers Training Camp has started. And fans, like Mike Tomlin, are smiling ear to ear.

ly at training camp? For my money, there’s nothing all that exciting about the Steelers being at camp, but it’s like boarding a flight before going on a tropical vacation. As a fan, you don’t have to exert much effort between now and whenever the Steelers season ends. You sit back and enjoy the ride until everything comes to a stop in January. Sure, you hope it’s February (if you know what I mean?), but it’s most likely going to be January.

You don’t have to try very hard to fill the football void because the news stories will be coming at you daily, and they’ll be authentic and organic. You don’t have to sit around and have debates about the draft. You don’t have to sit around and talk about Tomlin’s worth as a head coach. Much like a lawyer prepping for a big case, everything from now on will be what they call discovery. How does veteran Mitch Trubisky look? Is he taking advantage of this second chance at being a starting quarterback in the NFL? Maybe he is, but perhaps Kenny Pickett, the first-round draft choice out of Pitt, is just too good to have a redshirt rookie campaign.

There’s so much at stake as far as Devin Bush is concerned. Coming off an underwhelming 2021 campaign, one in which he was clearly still affected by a torn ACL suffered in 2020, this is Bush’s time to show everyone that the Steelers didn’t make a mistake by trading several picks away to move up to the 10th spot to take him in the 2019 NFL Draft.

There are so many other stories to mine in camp, and it’s such an exciting time for the Steelers organization. Ben Roethlisberger has moved on after 18 years, and the franchise is tasked with ushering in a new era and doing so the right way.

The Steelers have been here before. They had to replace Chuck Noll in 1992, and couldn’t have found a better successor than Bill Cowher. Fifteen seasons later, less than one year after he finally brought home the organization’s fifth Lombardi Trophy, Cowher said goodbye.

Will the Steelers strike gold again with their new quarterback? That remains to be seen, but I do know this: The time for speculation is over.

The Steelers 2022 season has arrived. Sure, it’s only moved into the development phase, but at least we’ve moved beyond the pre-production period.

When I was a kid, the NFL would loosen its grip on you for a few months during the offseason and allow you to concentrate on other things. But those days are now over. Is it a better time to be an NFL/Steelers fan? Is the constant engagement, with every little thing–including the ridiculous schedule reveal “event”–garnering “front page” coverage, healthy? I guess that all depends on your priorities.

But while I’ve always struggled during the offseason with caring about things like NFL free agency and the mind-numbing draft coverage that never seems to end, staying enthralled with all-things football during the season takes no work at all.

It never gets old.

The Steelers are my team, and this is my time of year.