The Pittsburgh Steelers announced earlier this week that the naming rights to the former Heinz Field have been purchased by Acrisure, as a FinTech insurance company is now supplanting a Pittsburgh icon.

The reaction on social media has been as swift as it has been severe. Fans don’t like it. Ben Roethlisberger hates it. Ask this Generation X Steelers fan what he thinks, and he’ll date himself even further with a M.A.S.H memory:

What is there to like about Acisure Stadium, a name that no one knows how to pronounce and of a company no one has never heard of? Not much. 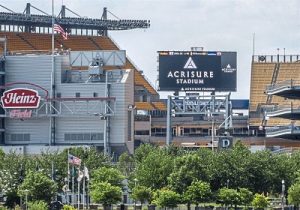 That is bad enough. What’s worse is what Acisure is placing. And if there is an entity that is more deeply interwoven into Pittsburgh’s DNA than the Steelers it is H.J. Heinz. To put this in perspective, my great grandfather was born in 1869, the year that Heinz began selling horseradish, pickles and sauces. While we don’t think he was born in Pittsburgh, he did live most of his life there, and Heinz was a present for all of it.

By the time John Bradley, a notary from Allegheny County who naturalized another great grandfather as a US citizen in 1888, “catsup” was already a making Heinz household word.

Does the fact that Heinz is now “Kraft-Heinz” and truly based in Chicago with fewer and fewer jobs, reduced operations and zero ketchup production in Pittsburgh ease the pain a little? Well, it probably should. But for most fans it doesn’t.

The fact that no other Pittsburgh company could take its place is perhaps more poignant. The obvious choices, PNC Bank (which was once “Mellon Bank” mind you) and PPG Paints already have their names on arenas in Pittsburgh. Are there any other local brands that have the money and muscle to make such a bid?

When corporate naming rights started in the 1990s it was controversial.

The San Diego Chargers played in San Diego Stadium from until 1967 until 1981 when it was renamed Jack Murphy Stadium. Jack Murphy was city’s mayor who died in office and had made enough of a contribution to the community for them to stadium after him.

But his contribution apparently wasn’t as big as the 18 million dollars that Qualcomm contributed in 1997 to the Spanos family have the name changed to Qualcomm Stadium.

Reflecting on the corporate-renaming trend at the time, a friend in Phoenix commented that “At least ‘The America West Arena’ doesn’t sound like a corporate name.” Heinz Field didn’t either.

And you know what? That’s OK.

Acisure Stadium Isn’t Sentimental, but It Sure Is Smart

Acisure Stadium doesn’t carry the sentimental weight that Heinz did, and never will. But it says here Art Rooney II made the right call.

Acisure is paying 150 million over 15 years for the naming rights. Heinz was only willing to pay 57 million. That’s an easy choice to make.

Art Rooney II, his uncles, his brothers, his kids and his cousins will never have to walk through the asiles at Giant Eagle with calculators in hand to make sure they’ll have enough cash when they get to the register. They’ll never need put off say, replacing a set of bald tires for another month because they had to pay an unexpected health care deductible.

And assuming the Steelers put the money back on to the field in the form of player contracts, as they’ve done since Heinz Field er um, Acrisure Stadium opened in 2001, they will have made the best decision for the Steelers.