Apparently, the popular belief is that the question put forth in the title of this article — which suggests that Mason Rudolph, the Steelers’ fifth-year quarterback out of Oklahoma State, has a shot of being the team’s starter in 2022 — is just plain nuts. 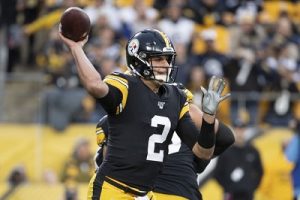 In order to accomplish this, Rudolph would have to overcome the odds made even longer when Pittsburgh went out and signed free-agent Mitchell Trubisky in March before using a first-round pick to draft Kenny Pickett in April.

Rudolph would also have to overcome his many critics who have long since washed their hands of him and his abilities.

Seventeen career appearances, including 10 starts. That’s Rudolph’s resume as he heads into his fifth season as a professional. That amounts to a season’s worth of time honing one’s craft at the most important position in team sports. Is that really enough to evaluate a player at any position but especially quarterback?

You can cite Rudolph’s career stat line which includes 2,366 passing yards, 16 touchdowns and 11 interceptions when stating your case against him. But I think the biggest indictment against Rudolph after 17 appearances is that he has yet to have a “wow” or “it” moment, meaning he hasn’t wowed you with his skills, nor has he shown himself to have that “it” factor vital to every franchise quarterback’s makeup.

Let’s be real, though, did Trubisky, selected second overall by the Bears in the 2017 NFL Draft, ever have a “wow” or “it” moment during his four seasons in Chicago? The Bears certainly didn’t think so, otherwise, they would have picked up his fifth-year option instead of allowing him to become a free agent in 2021 and sign a deal to be Josh Allen‘s backup in Buffalo. Trubisky was solid in Chicago. For example, he had a 29-21 record as a starter and threw 64 touchdowns to 38 interceptions, but teams — even ones who appear to be as clueless about the position as the Bears are — don’t let perfectly good quarterbacks walk away.

As for Kenny Pickett, he’s an exciting prospect, and he had an incredible fifth season at Pitt, one in which he put the football program on his back and carried it all the way to an ACC championship.

I’m not trying to disparage Trubisky and/or Pickett. In fact, I will be rooting hard for whoever wins the Steelers starting job in 2022. But are either of those guys that much better than Mason Rudolph, at least on paper?

How will Rudolph respond after an offseason where he knew he had at least a puncher’s chance of winning the starting job in Pittsburgh? Everyone knew Rudolph would never have a chance as long as Ben Roethlisberger was around, but if I were him, I don’t think I’d feel all that intimidated by the task of beating out his current competition for the role.

Being a backup quarterback in the NFL is tough. You get few opportunities to show what you can do during a regular-season game, and if you don’t impress people with the limited action you do get, it’s easy for negative opinions to form and harden fast.

Once those negative opinions form, it takes a lot to change them into something more positive.

Finally, your mind may already be made up about Mason Rudolph and his abilities as an NFL quarterback, but I sure do hope the Steelers keep an open mind about him as he takes his reps at Saint Vincent College this summer.

Good quarterbacks are hard to find, and the Steelers need to be as thorough about their quarterback search during training camp as they were in the offseason.