Being a field goal kicker in the NFL is a tough job. It’s obvious to the entire world when you succeed or fail.

If you’re good at what you do, you get to keep doing it, but if you’re bad, you’re not going to stick around very long. Heck, even if you’re really good for a long time, you could still lose your job if you struggle for just a few games. 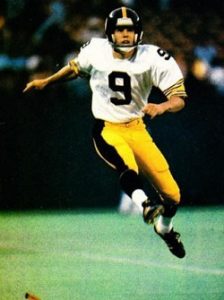 Former Steelers kicker Matt Bahr, on the road, during the 1979 or 1980 season. Photo Credit: NASL.com

Unlike other positions in the NFL, kickers are on the wrong side of supply and demand, where the supply of kickers walking around far outweighs the demand for them at the professional level; there are only 32 teams in the NFL and only 32 jobs available. There are no backup kickers, no third-stringers. You’re either a starter or an insurance salesman.

Matt Bahr, a sixth-round pick by the Steelers in the 1979 NFL Draft, initially looked to be one of those kickers who would have to choose his life’s work a lot sooner than he would have liked. The Penn State product did make Pittsburgh’s roster as a rookie, but his results were less than stellar, as he made just 18 of 30 field-goal attempts. Sure, Bahr did okay for himself in the postseason, making three of four field-goal attempts for a Steelers team that would go on to win its fourth Super Bowl title in six years, but he certainly didn’t show much improvement in Year 2, making just 19 of 28 during the 1980 regular season. Perhaps Bahr’s most “notable” moment during the ’80 season occurred in a Week 6 loss to the Bengals at Three Rivers Stadium when he missed a 39-yard field goal that would have put the Steelers ahead with mere seconds left.

Despite his struggles, Bahr, who was obviously riding the wave of the Steelers’ ’70s Super Bowl success, was the star of a Kentucky Fried Chicken commercial in the fall of 1980. Bahr’s money line in the commercial, ironically enough, was, “Do one thing all the time, you get to be great.”

Unfortunately for Bahr, he was sent packing after connecting on just 63.7 percent of his field-goal attempts over his first two seasons. Bahr quickly found a home with the 49ers in 1981, but after making just two of six field goals, Bahr was traded to Cleveland, where he closed out his third NFL season by hitting on a rather pedestrian 13 of 20 attempts. Bahr managed to stick with the Browns in the strike-shortened 1982 season, but he seemed to get worse, not better, and connected on just seven of 15 attempts.

So, after actually regressing during his third and fourth seasons, Bahr appeared to be at a crossroads as an NFL kicker, complete with a 59.5 career percentage on field-goal tries.

But something curious happened in 1983: Bahr became a damn-fine kicker and connected on 21 of 24 field-goal tries for a Browns team that somehow had the instincts to keep him around. Bahr spent the rest of the ’80s with the Browns and connected on 77.8 percent of his field-goal attempts between 1983-1989. Rather impressive, considering how windy, cold and cavernous old Cleveland Stadium was.

Bahr joined the Giants in 1990 and would eventually have his finest hour later that season; Bahr connected on a then-postseason record five field goals in the NFC title game against the 49ers at old Candlestick Park — including the 42-yard game-winner as time ran out. Bahr accounted for his team’s only points in a 15-13 victory that sent the Giants to the Super Bowl where they upset the Bills in dramatic fashion.

Bahr seemed to get better with age and connected on 79.7 percent of his field goals in the ’90s during stints with the Giants, Eagles and Patriots before finally retiring prior to the 1996 campaign.

Bahr connected on 72.3 percent of his field-goal tries during his career (300 of 415), a number that placed him just a class below some of the best kickers of his day–including Gary Anderson and Morten Andersen. In fact, when he was at the top of his game in the ’80s and ’90s, there wasn’t a whole lot that separated Bahr from his more decorated contemporaries.

Bahr will never make it to the Hall of Fame, but he is a two-time Super Bowl champion, and I’ll bet he’s never had to pay for a drink in the Big Apple.

Matt Bahr was an example of a kicker who was allowed to work through his early struggles and go on to have a really good and lengthy career in the NFL.

Or at least good enough to stick around.