All eyes will be on choice Kenny Pickett tonight as the Steelers square off against the Jaguars tonight in their 2nd preseason game of the 2022 exhibition season.

The Steelers of course drafted the Pitt Panther in the first round of the 2022 NFL Draft, and after a slow start in training camp, Pickett was arguably the star of the Steelers preseason win over the Seahawks last week leading a, dare we say, Ben Roethlisbergeresque comeback.

Sure, it was in the second half of the first NFL preseason game against a group of guys who’ll count themselves lucky if they spend a day on an NFL practice squad.

Which begs the question: If Pickett played so well and if Mike Tomlin is running a serious quarterback competition, then shouldn’t Pickett get a shot at starting a meaningful preseason game? 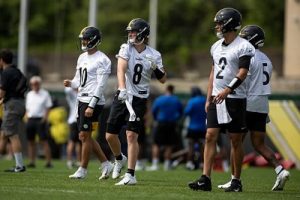 And there’s the rub.

Under the 4 game preseason format, it would have been far easier to give Kenny Pickett, Mitchell Trubisky and Mason Rudolph a shot at starting a game. But now that preseason is only limited to 3 games, the math gets harder.

Bill Cowher gave each quarterback a start, (thanks to an America Bowl game in Tokyo,Steelers actually had 5 preseason games that summer) decided on Jim Miller, but jerked him after just one half in an ugly season-opening loss to the Jaguars.

Looking back on that experience, perhaps it’s one of the reasons why, for all his talk about holding an open competition, Mike Tomlin has appeared intent on have Mitch Trubisky open the season as the starter.

But I for one would have liked to see each quarterback benefit from starting a game with the rest of the first team, followed by a rotation that gives the others a representative split of time playing with both primary backups and the guys struggling to land a roster spot somewhere.

Heck, is really hard to have two different QBs start a meaningful game. Yeah, the old curmudgeon in me who likes to sing the praise of the virtues of preseason football IS coming out. But that grumpiness is tempered by the reality the hemming and hawing over the poor quality of preseason football has become a self-fulfilling prophecy.

Last year, Mike Tomlin did give hte late Dwayne Haskins a legitimate shot at wresting the job from Mason Rudolph. Reading the coverage of someone Haskins work with the second team, you’d have thought he flashed signs of stardom.

Watching the games told my eyes that I was seeing “good” but not great performances. When Haskins finally got his start, he blinked, but he wasn’t nearly as bad as some of the critiques written about him would have had your think.

The Steelers brass obviously had a different view, because they wasted no time in tendering Haskins an exclusive rights free agent contract.

At the end of the day, in a perfect world, each of the Steelers quarterbacks would start a meaningful game in the preseason. But the game has moved on, imperfectly or perhaps perfectly, but regardless, Mike Tomlin has a plan and he is sticking to it.

And Mike Tomlin knows “a little bit” more than I do about preparing quarterbacks to start in the NFL, so good for him.