The Steelers 2022 preseason finale win over the Detroit Lions may not have had the intensity of an ole style Chuck Noll preseason finale dress rehearsal, but it certainly brought a lot more to the table than the 4th preseason wrap up games against the Carolina Panthers.

And that revealed both good and bad for the Steelers now that the games that count are about to start.

With that in mind, here are 6 not-so-random thoughts on the game. 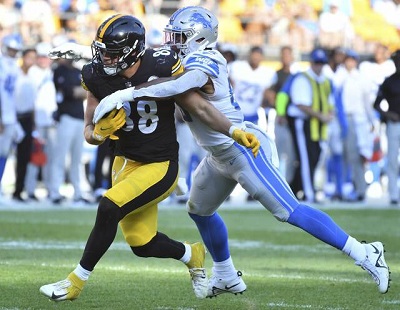 1. The Offensive Line Has Potential to be Truly Offensive

The big ugly spot coming out of the preseason win over the Jaguars was the offensive line, which had been horrendous in that preseason game. Could the unit improve week-on-week?

Not really. Mitch Trubisky was sacked twice and had to get out of trouble many more times. And while he did have time to throw on a couple of his longer passes, we also saw plenty of the “chink-and-dink that plagued the Steelers offense during Ben Roethlisberger’s final two seasons.

The run blocking wasn’t much better, with the Steelers averaging 2.9 yards on the ground. Najee Harris saw his first action, and did a decent job of making something out of nothing on more than one occasion.

After the game Mike Tomlin did concede that the line had improved a little, it did, but those improvements were offset by penalties. The Steelers offensive line has a long way to go before it is no longer a liability.

3 sacks, 1 interception, 12 passes defensed and 2 4th down conversions stopped. Yes, as Mike Tomlin cautioned, it is only preseason. And yes, the defense did allow longer runs of 27, 10, and 11 yards.

But it is hard to avoid watching and coming away with the feeling that this defense is headed in the right direction.

3. Freiermuth is for Real

Pat Freiermuth not only lead the team in touchdowns, he came up with a key 32 catch that set up Steven Sims touchdown catch as time was expiring at the end of the first half. Based on what we saw from Freiermuth last season this shouldn’t surprise anyone.

But it always takes two years to really measure a player’s mettle, so its nice to see Freiermuth deliver.

After coming in and playing exceptionally well during his first two preseason outings, Kenny Pickett still looked good but played like a mere mortal. He did make one long critical completion with a perfectly placed ball to Myles Boykin. And 3 plays later he hit Olszewski with a catchable ball in the end zone.

Benny Snell has had some injury issues this summer while Jaylen Warren has earned a lot of positive press. Snell’s stat line is a modest 17 yards, but he did post the highest total of the group and earned the best rushing average of behind a bad line.

More importantly, his hustle was apparent.

Snell was playing as if his job depended on it – it very well may – and that’s what you want to see in a situation like this. More importantly, he made something out of nothing on a couple of carries – a skill that’s going to be critical behind this line.

6. Trade Mason? Are You Out of Your Vulcan Mind?

The Steelers decision to cut 7th round pick quarterback Chris Oladokun set off a social media firestorm the likes of which have not been seen since the team cut 4th round pick Doran Grant prior to the 2014 opening day.

Was it because, like Devlin Hodges, Chris Oladokun had been the summer superstar at St. Vincents and the standout during preseason games? No. He never saw the field in preseason and, by one count, completed just over 46% of his passes in practice.

As they should. Mason Rudolph has quietly authored the most consistent performance of any Pittsburgh quarterback this summer, although he’s not had much time with the first team. And for fans that don’t want to hear that, take this from the Lions. Midway through the 2nd half, the broadcasters flashed a “Battle of the Backups” graphic, showing that Tim Boyle had completed 5 of 15 passes for 64 yards and one interception vs. 4 of 10 for 50 yards for David Blough.

Blough of course got more garbage time yards, but that stat alone shows that the Steelers are very lucky to have a quarterback of Mason Rudolph’s caliber as their 3rd string.