Whenever anyone discussed an aging Ben Roethlisberger in recent years and what the Steelers’ plan should be for finding his successor, I was always a staunch supporter of drafting a quarterback in the first round right after the big guy retired and throwing the youngster into the fire as quickly as possible. 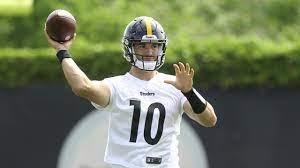 The Steelers did ultimately pick a quarterback with the 20th overall selection of the 2022 NFL Draft — Kenny Pickett, the pride of the University of Pittsburgh. No offense to Mason Rudolph, but had the fifth-year man from Oklahoma State been Pickett’s top competition going into training camp, I would have given my plan a very good chance of becoming a reality.

Only problem? Mitch Trubisky became Pickett’s top competition about six weeks before the latter was even selected by Pittsburgh. That’s right, the Steelers agreed to a two-year deal with Trubisky, the number-two overall pick in the 2017 NFL Draft, at the onset of free agency, a development that seemed to indicate he would have the most realistic chance of becoming Roethlisberger’s immediate replacement.

Still, the Steelers did draft Pickett in the first round, and teams don’t spend that kind of draft pick on that position unless their plan is for that man to start sooner rather than later. But it became a bit easier to perhaps give Pickett a “redshirt” rookie season with Trubisky available to start for Pittsburgh in 2022.

If only Trubisky wasn’t struggling at training camp, which he seemingly has been since the moment he took his first practice rep at Saint Vincent College in Latrobe, Pa.

Most importantly, Trubisky has struggled to convince anyone that he’s not the same quarterback who struggled to be anything other than ordinary during his four years with the Bears.

Yes, it is true that Rudolph has looked the most comfortable at quarterback during the early portion of the Steelers 2022 training camp, while Pickett has been up and down–although, Week 2 has been more encouraging than Week 1. Unfortunately, Trubisky, despite his struggles, has taken the vast majority of first-team reps, and it appears that the Steelers are hellbent on him being the starter when the team travels to Paul Brown Stadium for the regular-season lid-lifter vs. the defending AFC Champion Bengals on September 11.

I suppose Steelers fans could and should be encouraged by the dominance of the Steelers defense, a unit that is very expensive and includes three All-Pros and the reigning NFL Defensive Player of the Year in T.J. Watt. Maybe there are few defenses in the NFL as dominant as Pittsburgh’s unit, and maybe things will open up for Trubisky once he goes up against lesser foes on that side of the ball.

Steelers fans sure better hope so. If not, Trubisky could join the likes of Cliff Stoudt and Mark Malone as the first quarterback to inadequately try to replace a legend. 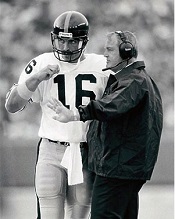 Unfortunately for Mason Rudolph, he may have already reached the point of no return with Steelers fans, a group who will probably just be waiting for him to screw up before unleashing its wrath even harder and with even more vengeance than when Rudolph was simply a backup–the kind of wrath normally reserved for a starting quarterback. There’s always the possibility of just throwing Pickett into that fire after a few more weeks of seasoning. Could that plan of mine actually work after all? It’s impossible to say at the moment.

Is this an overreaction? After all, the Steelers haven’t even reached Week 3 of training camp. Hopefully, it is. If not? Be prepared to hop in a time machine and take a trip back to the mid-’80s.