Taken from the grade book of a teacher whose summer assessment of his student’s strengths and weaknesses appears to be on target, here is the Steelers Report Card for the 2022 overtime upset win over the Bengals at Paycor Stadium. 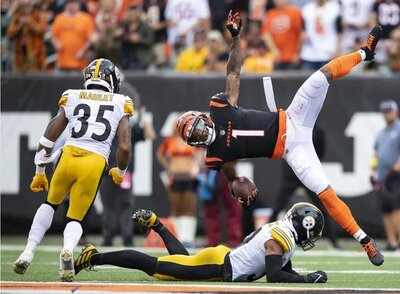 Quarterback
Mitch Trubisky first start brought good, bad and ugly. The Ugly: The Steelers were 4-15 on third down and they punted 8 times, including FIVE three and outs. The Bad: Pittsburgh only had 113 yards in regulation and only scored one touchdown. The Good: Trubisky avoided turnovers and kept himself upright. More importantly, he put the offense in scoring position not once but twice in over time. Grade: C

Running Backs
You know your running game has issues when a wide receiver has more yards on the ground that RB 1 and RB 2. Combined. Najee Harris had one nice run, but otherwise had no where to go. Jaylen Warren had 7 yards on 3 carries…. It may not be their “fault” but the running game was “Below the line.” Grade: D

Tight Ends
Pat Freiermuth and Zach Gentry both set up touchdowns with long gains in the first half, with Freiermuth making not one but two key catches that set up the game winner in OT. Surely the tight ends shoulder some responsibility for the run blocking fiasco, but they delivered Trubisky looked their way. Grade: B+

Wide Receivers
Diontae Johnson had what was perhaps his best catch as a Steeler and one that should have set up the game winner in overtime. Chase Claypool did his damage with 4 catches and 3 runs. George Pickens had 1 catch for 3 yards. The receivers did their part. Grade: C+

Offensive Line
Mitch Trubisky was sacked once, hit 5 other times and had to scramble 3 times. Not great, but a slight improvement over last year. The run blocking was atrocious. Pittsburgh was positively pathetic when trying to pound it in at the goal line. Nor did they get any push upfront at any point in the game. This. Must. Improve. Grade: F

Defensive Line
Cam Heyward’s opening sack was a tone setter for the entire game. His fumble recovery set up another score. Larry Ogunjobi had four tackles and a QB hit. Tyson Alualu and Chris Wormley had two. Joe Mixon was in check all day and just as Joe Burrow was under pressure. Grade: A

Linebackers
Alex Highsmith had 3 sacks while T.J. Watt had a sack, an interception and batted down two passes. Robert Spillane had a sack, and Devin Bush played aggressively. Myles Jack had a key pass defense and led the linebackers with 10 tackles. Grade: A

Secondary
Minkah Fitzpatrick dominated the Bengals. His pick six forced them to play catch-up from the get go. He led the team in tackles and, even after a bogus penalty in the end zone, he broke up a would-be touchdown on the next play. Cam Sutton and Ahkello Witherspoon both had interceptions while Levi Wallace had a key pass break up. Terrell Edmunds quietly put in a good game stuffing out a number of runners before they could reach the second level. Grade: A

Special Teams
Gunner Olszewski made his single returnable punt count by setting up a score with a 20 yards return. Pressley Harvin averaged over 48 yards on his 8 punts. Punt return coverage was strong. Minkah Fitzpatrick’s extra point block was the game’s second most important play after his pick six. Chris Boswell did miss a field goal in OT, and that brings this grade down, but he didn’t blink on his second chance. Grade: A-

Coaching
The Steelers defense came out swinging with a sack and an pick six on successive plays. They kept that up for the next 72 minutes. But Splash plays were nothing new compared to last year.

For 2 years debate has raged over “What a Matt Canada offense will really look like.” Well, now Canada has his quarterback, but against the Bengals it was more of the same:  Weak offensive line play, three-and-outs, lots of Chris Boswell field goals with just enough late fireworks to keep it interesting.

Canada might not have the personnel upfront and Tribuisky might not be a long-term signal caller, but he needs to find a way to make it work now.

Mike Tomlin welcomed many new faces to the fold this off season on all sides of the ball. Had you not known that you’d have thought this was a group of veterans who’d been together for 6 or 7 years based on their resiliency alone. Grade: B 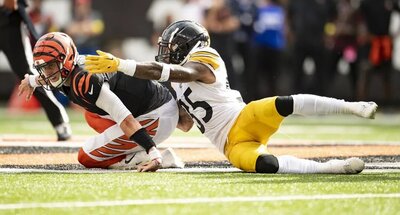 Unsung Hero Award
This player embodies the principle that the Steelers care about what you can do, not where you come from. He arrived in Pittsburgh as a veteran minimum player during an off season where the Steelers were navigating salary cap Armageddon. He did enough to earn a second contract, and in Cincinnati his strip sack was enough to give Chris Boswell a second chance to win it in overtime. And for that Arthur Maulet wins the Unsung Hero Award for the Steelers 2022 opening day overtime win over the Bengals.