As Mike Tomlin stated, the game came down to a couple of “significant plays,” and one of those provided this writer an opportunity to regret being right. 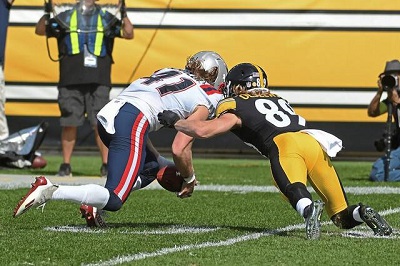 Gunner Olszewskimakes the tackle after muffing a punt. Photo Credit: AP, via Tribune-Review

Gunner Olszewski made his NFL debut during the 2019 opener. That Steelers-Patriots game was to be the final Ben Roethlisberger-Tom Brady Matchup, which New England won 33-3.

The Steelers signing of Gunner Olszewski in the off season was a surprise. Gunner signed for close to half of what Ray-Ray McCloud had gotten to go to San Francisco, yet on balance his return numbers were a little better. And with only three years in the league, the kid had “upside” both as a returner but also as a receiver.

Which begged the question, why would Bill Belichick let this kid walk? A closer look at his return numbers for the 2021 season offered a possible explanation – ball security. He fumbled the ball 3 times last season, all on returns.

Ray-Ray had his own issues with ball security, and numerically the risk Olszewski fumbling was only a smidge higher. On the whole however, it seemed like a wise cost-benefit move for the Steelers, given that Pittsburgh was saving over 6 million dollars. But that concussion came with a caveat:

However, when you factor in that but 3 of Gunner Olszewski’s fumbles came in 2021, should Gunner Olszewski fumble a return the 4th quarter fumble of a close game, that 6.4 million could seem like a bargain.

As it was, Gunner’s came at the end of the 3rd quarter not in the 4th quarter, but it gave the Patriots an 11 point lead, which ultimately proved to be too much for the Steelers to overcome.

And let’s be fair to Gunner on one thing: He certainly didn’t “lose” this game for the Steelers. In fact he had plenty of help.

Some Good Before We Get to the Bad

Mitch Trubisky did leave a lot to be desired today. But the offense he led also took some tentative crawls forward  which represented, dare we argue, progress at least compared to last week. Sound fishy? Then consider this:

Minkah Fitzpatrick pulled down his second interception in as many weeks, which didn’t have much impact in the game but was nice to see all the same.

As Jim Wexell pointed out prophetically before the game, the “Patriots are 8-0 when they have the edge in turnovers” under Mac Jones. Today that record improved to 9-0.

If Trubiksy does deserve credit for improved third down performance, even casual observation reveals that he is honing in on one receiver at the expense of missing others. In the same vein, if the offensive line showed some signs of life in the run blocking game, this unit remains very, very far from dominating in the trenches.

But all of this talk of progress above remains academic until the Steelers offense can so that it can score more than one touchdown per game. Or manage more than two straight 3 and outs when three points behind late in the 3rd quarter.

If player’s post game comments are any indication, players are beginning to become frustrated by Matt Canada’s offense. 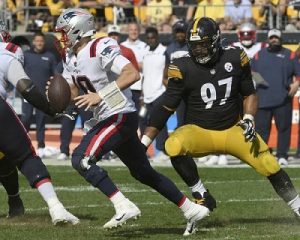 Malik Reed, Tyson Alualu, and Alex Highsmith may have landed a few QB hits, but Mac Jones was otherwise writing his diary back there.

For as valid as those criticisms are, when New England got the ball back with 6:33 left to play, it could be said that up until that point the Steelers defense had done enough to win the game. After all, they’d just forced 2 punts limiting the Patriots to 10 plays while trying to get the ball back in a 3 point game.

Bill Belichick started handing the ball to Damien Harris and Rhamondre Stevenson and the Steelers were powerless to stop either of them. They started slow, getting first 3 then 4 yards. But they improved, going for 6, 8, then 16 before finally settling in with a final 5 yarder that allowed New England to kill the clock.

But the inability of the Steelers defense to slow, let alone stop the Patriots running game as the clock ticked away proved to be the difference in this game.