What if I told you that a particular Pittsburgh running back rushed for 136 yards on 29 carries (4.68 yards per rush) and added another 40 yards on three receptions in the Steelers’ most recent game?

You’d take it, right? Heck, you might even think this running back deserved low-key consideration for NFL Offensive Player of the Week. 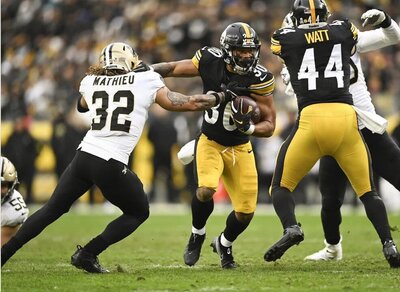 If you were a Steelers fan, you’d also likely assume that the running back was Najee Harris, a second-year player who couldn’t have been more of a workhorse in 2021 when he accumulated 381 total touches.

You’d be right to assume that, too, considering Najee Harris’s head coach is named Mike Tomlin, a man who’s never met a starting back he had no problem running until his wheels fell off.

Your assumption would be off, however, at least if you made it about Pittsburgh’s 20-10 victory over the Saints at Acrisure Stadium last Sunday.

Instead, the division of labor was divided up, if you will, with Harris toting the rock 20 times for 99 yards, while rookie Jaylen Warren, a UDFA from Oklahoma State, tallied 37 rushing yards on nine carries and added another 40 receiving yards on three catches.

In the days leading up to the game against New Orleans, there was talk — right from the horse’s mouth, in fact (Tomlin’s) — that Warren could and should get a bigger role in the Steelers’ offense.

It was just a way to motivate his bell cow running back, Najee Harris, who had struggled mightily over the first eight weeks of the 2022 campaign. Tomlin has always seemed allergic to the running-back-by-committee approach. If you don’t believe me, ask LeGarrette Blount. If you don’t want to believe Blount (and I can certainly understand why you’d be afraid to even ask him a question), you can ask DeAngelo Williams, a much better teammate than Blount. Unlike Blount, who was cut shortly after leaving the field before the end of a Monday Night Football game against the Titans back in 2014, Williams was happy with his role as the backup to star running back, Le’Veon Bell.

DeAngelos Williams proved to be valuable in 2015, his first season in Pittsburgh, when he filled in for a suspended Bell to start the year and, again, for an injured Bell over the final two months of the regular season.

Williams was again valuable and extremely productive over the first three games of the 2016 regular season when Bell was suspended a second time for violating the NFL’s substance abuse policy.

To reiterate, Mike Tomlin has never evolved beyond his bell cow running back philosophy.

Or maybe he has.

Harris and Warren worked beautifully together. You have to credit Tomlin for allowing it to happen, but you also have to credit offensive coordinator Matt Canada for finding a way to utilize both running backs effectively.

Is this the start of a new philosophy for Tomlin? Is he going to finally ease up on his starting running back?

I suppose we’re about to find out over the next few weeks.