On Sunday Argentina won its first World Cup since 1986 while Pittsburgh Steelers beat the Carolina Panthers 24-16, appearing intent on avoiding the fate of the ‘86 Steelers.

Cosmetically, the win improved Pittsburgh 6-8; their ’86 brethren finished 6-10, so the ’22 Steelers still have work to do to avoid reliving some infamous history.

And the reasons for the Steelers success in Carolina are no mystery. Pittsburgh won because, as Mike Tomlin explained, “ We wanted to win the line of scrimmage on both sides. I thought we were effective in doing so.” 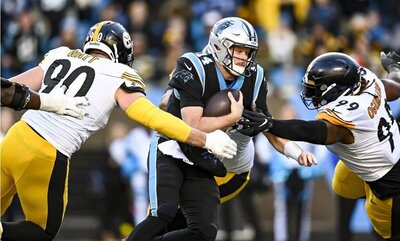 You’ve got to admire Mike Tomlin. The man never lets fear drive his decisions. The Atlanta Falcons ran well against the Steelers in the 2nd half. Last week, the Baltimore Ravens, playing their third string quarterback, imposed their will.

It was embarrassing. More than one commentator described the Steelers failure to stop the Raven’s run on 3rd and 3 with the game on the line as “season defining.”

The Carolina Panthers haven’t done a lot of things well this season, but establishing a physical running attack certainly has been one of them. Mike Tomlin knew Carolina’s first objective would be to establish the run.

Carolina tried. D’Onta Foreman took the first carry, hoping to power run off of the left tackle. Larry Ogunjobi dropped him for a 1 yard loss.

While Sam Darnold did lead the Panthers to a touchdown in their next drive, their next 3 drives of the first half netted 2, negative 9 and 6 yards. This was truly an impressive performance from a Steelers front 7 that had been manhandled during the previous 6 quarters.

The Beauty of 7 Instead of 3

Few may wish to admit it, but Matt Canada’s offense has improved over the last 2 month. As Kenny Pickett has grown more comfortable, the Steelers have protected and possessed the ball.

But that improvement hasn’t extended to the Red Zone.

Whether its been Chris Boswell or Matthew Wright the field goal has been Pittsburgh’s most potent weapon, which leads to a very weak offense.

As they have in previous weeks, Steelers started out feeding the ball to Najee Harris and Jaylen Warren. Both men ran effectively. When it was needed, Mitch Trubisky, starting in place of the concussed Kenny Pickett, hit Diontae Johnson and George Pickens to convert.

The difference was that when the Steelers reached the Red Zone, they remained committed to the run and, more importantly, they were successful. That led to two touchdowns, giving the Steelers a 14-7 lead at the half.

The dividends getting 7 twice instead of settling for three on either or both occasions would be clear 12 minutes into the 2nd half. 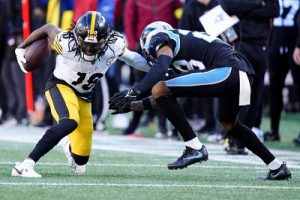 Yet, there’s an underappreciated side of momentum that isn’t as exciting but is just as important. And that’s when a team executes a methodical game plan that sustains a drive. The Steelers did that to open the 2nd half, running 21 play 91 yard drive, where they converted 5 third downs with all hands in the pile.

By the time Mitch Trubisky found the end zone on his second try, a mere 3 minutes and 17 seconds remained in the 3rd quarter and the Steelers had a two touchdown lead.

A 14 point lead with 18 minutes left to play would a minor speed bump for a team like the Bengals, Chiefs or Bills. But the Panthers aren’t the type of team. In truth, the Steelers defense should have effectively ended the game when Cam Heyward sacked Sam Darnold to end the third quarter.

They advanced to Pittsburgh’s ten, before Heyward and Terrell Edmunds stuff out a Darnold draw. The Panthers again reached the Steelers 2, but Alex Highsmith forced a fumble followed by a T.J. Watt and Cam Heyward sack that forced another field goal.

Carolina did get another field goal, hoping to set up for an on-sides kick, but as Pittsburgh fans know all too well, if you settle for field goals instead of touchdowns too often, you lose.

Take Away – Tomlin’s Team Will Fight to the End

At 6-8, the 2022 Pittsburgh Steelers remain a team that plays well against bad teams, which is part of rebuilding. But losses like the one the Steelers suffered last week at the hands of the Ravens can often break a team.

But the physical nature of the Steelers win in Carolina shows that Mike Tomlin managed to use the loss as a vehicle for strengthen his team’s will instead of breaking it.