It has been said that Mean Joe Greene, the Hall of Fame defensive tackle, two-time Defensive Player of the Year winner and four-time Super Bowl champion, helped change the culture within the Steelers organization.

Joe Greene refused to accept losing and a losing mentality, and he demanded that everyone–including his teammates, coaches and even the team owner–have that same mindset. 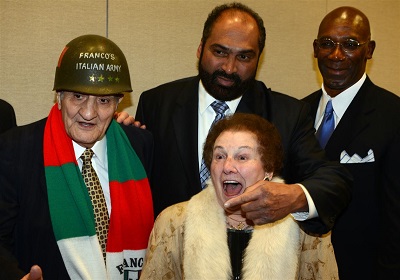 But if Greene changed the culture within the Steelers organization, Hall of Fame running back Franco Harris, a nine-time Pro Bowler and a four-time Super Bowl champion, helped change the culture in the stands and in the fan base.

Franco Harris unexpectedly passed away on Wednesday, just days before he was to be honored by having his No. 32 retired 50 years and one day after he starred in the greatest play in NFL history — the Immaculate Reception.

Franco Harris’s sad passing has been met with countless stories of his love of community, love of Steelers fans and just a genuineness that was hard to fake.

Harris became a fixture in the Pittsburgh community and one of the most accessible athletes in the history of the region’s sports landscape.

And I believe the seeds of the figure Harris would become were planted 50 years ago when the Steelers selected him out of Penn State in the first round of the 1972 NFL Draft.

Most Steelers fans know the sad history of the franchise for the first 40 years of its existence. Pittsburgh appeared in one postseason game between 1933-1972–a 21-0 loss to the Philadelphia Eagles in an Eastern Conference Playoff Game in 1947.

For years, the Steelers played their home games at Forbes Field–really a baseball venue–before moving to Pitt Stadium–the football home of the University of Pittsburgh Panthers.

But even after Three Rivers Stadium gave the Steelers their first true home in 1970 — sharing it with the Pirates, of course — attendance just wasn’t good. That’s because the results on the field still weren’t promising, even if Chuck Noll, the new head coach hired in 1969, was putting the pillars in place for what would become a rock-solid contender by the early-’70s.

That all changed in 1972 with the arrival of Harris.

Harris rushed for 1,055 yards as a rookie and scored 10 touchdowns on the ground. He was eventually named NFL Offensive Rookie of the Year and was voted to his first Pro Bowl.

Harris also galvanized the fan base like no Steelers player had been able to do before him. The fans immediately adopted the youngster, who was of mixed race, as his father was African American, while his mother was Italian. The Italian part of Harris’s heritage was what spawned the most famous fan club in Pittsburgh sports history: 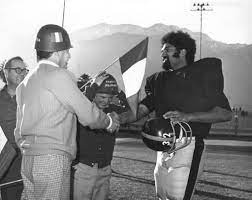 Franco’s Italian Army was so popular by the end of the 1972 season that Frank Sinatra was named an honorary member and actually interrupted a practice one day in order to greet the rookie running back.

But, make no mistake, Franco Harris was embraced by everyone. Many fans — black, white, Italian, Irish, etc. –identified with Harris. Again, being of mixed race in the early-’70s wasn’t nearly as easy as it is today (and it’s not exactly easy today). Yet, Harris transcended the social climate of the time and was able to find universal appeal.

It certainly helped that he was successful right away and that his arrival marked a transition for the franchise, as the Steelers finished 11-3 and won their first AFC Central Division title. The fans were so ravenous for a football winner by the time Harris came on the scene that, according to him, it was like the whole city had been waiting for such a thing forever.

Even before the end of the 1972 campaign, many more player fan clubs had popped up in the stands at Three Rivers Stadium, but the Italian Army was always the most famous. Harris rewarded his soldiers on December 23, 1972, by riding in on a white stallion (to quote Jack Fleming, the team’s radio play-by-play broadcaster for many years) and riding off into the sunset by scoring a touchdown that not only gave the Steelers their first playoff victory in team history but would continue to grow in lore until it became larger than life.

Player fan clubs became commonplace by the end of the decade, as just about every player–even guys like John Banaszak and Dirt Winston — had banners hanging from the stands of old Three Rivers Stadium in celebration of the four-time Super Bowl champions.

Myron Cope, the late, great Steelers color commentator, radio personality and Sports Illustrated writer, created the Terrible Towel in 1975, and it has become the unifying symbol for Steelers fans all over the world.

Thanks to the decay of the steel industry in the 1970s, Pittsburghers were forced to migrate to other parts of the country and even the world in subsequent decades. But no matter where they decided to put down roots, the love for the Steelers stayed with these folks.

Today, we refer to anyone who is part of this passionate black-and-gold-clad fan base as a member of Steeler Nation.

Franco Harris meant so much to the Pittsburgh Steelers and the success they had on the field.

But he may have meant even more to their fans and is perhaps the most galvanizing player in the history of the franchise.