Taken from the Grade Book of a teacher proud to see his students bounce back after what could have been a humiliating loss, here is the Pittsburgh Steelers Report Card for the 2022 win over the Carolina Panthers. 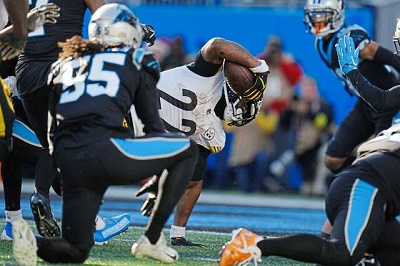 Quarterback
Mitch Trubisky was a careful but efficient 17 of 22 for 179 yards. He didn’t throw a touchdown pass, but he also avoided interceptions.  The Steelers converted 12 of 16 third downs, and while some of those were runs, Tribuisky had to several key long throws and authored the NFL’s longest drive since 2001. Grade: B+

Running Backs
Najee Harris had 86 yards on 24 carries and one touchdown. Jaylen Warren had 38 yards on 11 carries and a touchdown. Derek Watt had 2 yards on another 3rd down conversion. The Steelers running backs ran well early. When Carolina clamped down they continued to run hard. Grade: B

Tight Ends
For the first time in recent memory, Pat Freiermuth did not catch a pass. Zach Gentry did catch one for 4 yards. The tight ends helped in the run blocking. Grade: B

Wide Receivers
Diontae Johnson had 98 yards on 10 catches catching all 10 targets. That’s impressive, as was his ability to convert third downs, even if he seems to have to resist the urge to run backwards. Amazingly, he STILL doesn’t have a touchdown 14 games into the season. Steven Sims and  Gunner Olszewski each had a catch. Grade: B

Offensive Line
The Carolina Panthers sacked the quarterback once and hit him one other time. The Steelers ran well during the first half. During the second half as the Panthers adjusted, the Steelers didn’t run as well, but they were able to run the ball at moments in the game when they needed to run it. Grade: B

Defensive Line
Cam Heyward was alive, recording 1.5 sacks and hitting the quarterback two other times. Larry Ogunjobi had 5 tackles including 2 for losses. Isaiahh Loudermilk had a tackle for a loss. Carolina’s running game went no where, and the line is a big reason for it. Grade: A-

Linebackers
T.J. Watt looked closer to his old self getting 1.5 sacks on critical downs, and getting to the quarterback on two other occasions. Alex Highsmith also had a sack and a forced fumble. Devin Bush had four tackles. Robert Spillane led the team in tackles, but was out of place on Terrace Marshall  that set up Carolina’s only touchdown. Grade: B

Secondary
Terrell Edmunds led the team in tackles with 5 and overall had a strong game. Overall the secondary played well, but this was more of a “bend but don’t break” game for the Steelers. Grade: B-

Special Teams
Chris Boswell knocked in a 50 yard field goal that essentially iced the game for the Steelers. Pressley Harvin had a solid day while Steven Sims was above the line as a returner. Kick coverage did allow a long return. Grade: B-

Coaching
Functioning at its best, Matt Canada’s offense isn’t going to make many fantasy football owners happy. Which is just fine by me. What the win over the Panthers showed was that the formula of ball control combined with touchdowns can be downright lethal.

If the Panthers did move the ball a little too easily at times against Teryl Austin’s defense, the Steelers completely neutralized the Panther’s rushing attack forcing them to try to beat them with Sam Darnold, at task which Darnold wasn’t up to.

The loss to the Ravens could have crushed his team. At the very least it appeared to expose the run defense as their soft underbelly. Yet Mike Tomlin opened the game by daring Carolina to run on him and challenging his defense to stop them. 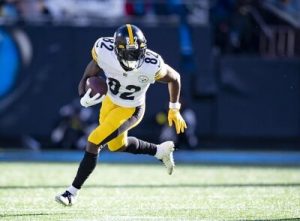 The Panthers tried. The Steelers stopped them. Grade: A

Unsung Hero Award
His 38 yard reception converted a third down and set up a touchdown. But it was his block that sprung Steven Sims free on a risky 3rd and 1 call that kept another TD drive makes George Pickens the Unsung Hero of the Steelers 2022 win over the Carolina Panthers.