Taken from the grade book of a teacher who is disappointed to see his students fail so miserably in the trenches, here is the Pittsburgh Steelers Report Card for the ‘22 loss to the Ravens at Acrisure. 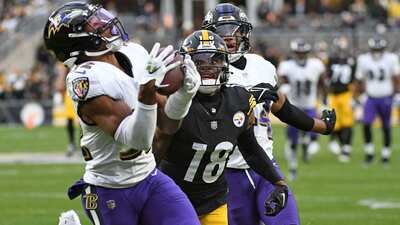 Quarterbacks
Kenny Pickett only lasted long enough to run twice, get sacked and throw an incomplete pass before leaving the game concussed. Mitch Trubisky came in and provided an immediate jolt of aggressiveness that the offense had been missing. That resulted in an immediate touchdown… …Followed by 3 interceptions in the Red Zone. Trade any one of those picks for a field goal and the Steelers win. Grade: F

Running Backs
The perception watching the game was that the running backs had a decent day. The numbers tell a different story, as Najee Harris only ran for 33 yards on 12 carries, Jaylen Warren 11 on 3 and Benny Snell 4 on 2. This wasn’t entirely their fault, but the Steelers clearly needed more from their ground game. Grade: D

Tight Ends
Pat Freiermuth may have only had 3 catches for 33 yards, but one converted a critical third down and another went for a touchdown. Connor Heyward caught one pass thrown his way, while Zach Gentry dropped on headed his way. Two of the 3 interceptions came when Trubisky was trying to force the ball to Friermuth. But that’s not his fault. Grade: B

Wide Receivers
Diontae Johnson had his best catch of the season (but STILL doesn’t have a TD) getting 82 yards on 6 catches. George Pickens caught 3 passes on 3 targets for 78 yards, including a tough one over the middle. Gunner Olszewski had one catch for 7 yards. Grade: B

Offensive Line
The offensive line only allowed 2 sacks and 5 QB hits overall, but the Steelers rushing averages show just how poorly the unit failed to control the line of scrimmage. Grade: C-

Defensive Line
A very disappointing day for the Steelers defensive line. The Ravens were going to run, the Steelers knew it, and couldn’t stop them. That’s not all on the defensive line, but stopping the run starts with them. Grade: F

Linebackers
Myles Jack, Robert Spillane and T.J. Watt all made some strong individual plays, including Watt with a sack. But the Ravens ran the ball exactly when they needed to, and the linebacker bear some of that blame. Grade: F

Secondary
That Minkah Fitzpatrick and Terrell Edmunds led the team in tackles should show you that things were failing up front. Cam Sutton had a strong game. With that said, the Ravens didn’t pass much. They didn’t need to. Grade: B

Special Teams
Where to start? Pressley Harvin’s 17 yard punt (ok, he had a really bad bounce) set up the Ravens only touchdown. Calais Campbell blocked a very makeable field goal. Nothing else matters. Grade: F

Coaching
The Ravens are a tough team to run against, but although the Steelers had some moderate success, Matt Canada abandoned the running game during the second half.

Talent and execution drive the defense’s issues for the most part, but the Teryl Austin and Brian Flores must take a long, hard look at the Steelers utter failure at stopping the run when they knew it was coming.

Mike Tomlin pulled few punches in his post game press conference. The Steelers are coming very close to playoff elimination and he will need to keep his team executing down the stretch. Grade: F

Unsung Hero Award
Bright spots were few and far between against Baltimore, but this wide out helped keep things moving by catching 4 of 4 passes thrown his way on underneath rounds and for that Steven Sims wins the Unsung Hero Award.