Taken from the grade book of a teacher who is pleased to see his students adding to the legacy left to them, here is the Pittsburgh Steelers Report Card for the win over the Raiders on the 50 Anniversary of the Immaculate Reception. 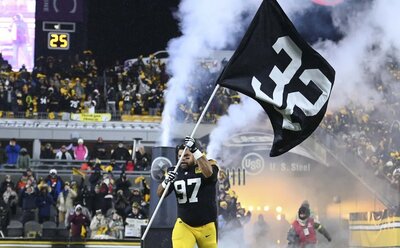 Quarterback
Kenny Pickett went 26 of 39 for 244 yards with 1 touchdown and one interception. In truth, Pickett did not look sharp for much of the first 55 minutes of the game. But he delivered perfectly when the game was on the line. Grade: B-

Running Backs
Najee Harris and Jaylen Warren combined for 76 yards on the ground on 22 carries, although perhaps those numbers would have been better had the Steelers committed more to the run. The duo also combined for 7 catches for just under 50 yards. Derek Watt was stopped on third down. Grade: B-

Tight Ends
Pat Freiermuth caught 7 of 8 passes thrown to him for 66 yards and the arrow on this kid continues to point up. Zach Gentry caught 1 pass for 1 yard and missed the block on Derek Watt’s run. Connor Heyward took a surprise pitch 21 yards and showed veteran savvy by sliding down in bounds to keep the clock running. Grade: B

Wide Receivers
Diontae Johnson had 5 catches for 64 yards on 7 targets, leading the group. George Pickens caught 5 passes on 5 targets including a 25 yarder, the night’s longest, and the game winning touchdown. Steven Sims and one catch for 7 yards on 1 target. Myles Boykin helped push Kenny Pickett to a first down on 4th and 1. Grade: B

Offensive Line
Kenny Pickett wasn’t sacked all night and was only touched on 4 occasions. That’s good. However, the run blocking wasn’t there on a consistent basis, forcing lots of 3rd and longs and consequently, punts. The Steelers need to be able to run the ball in cold weather. Grade: C

Defensive Line
Larry Ogunjobi have only had one stop for a loss, but he helped dominate the Raiders upfront after the opening drive. Montravius Adams had 3 tackles as part of an effort that shut down the Raiders running game on a night when running the ball meant everything. Grade: A

Linebackers
Alex Highsmith closed the third quarter with a 13 yard losing sack of David Carr which helped begin the Steelers rally. T.J. Watt had a tipped pass and a tackle for a loss. Robert Spillane led the team in tackles with 12. Grade: A-

Secondary
Arthur Maulet made a heads up play intercepting the ball immediately after Pickett’s turnover. Minkah Fitzpatrick Short circuited their next drive with an interception of his own, and helped set up a sack on a blitz late in the fourth quarter. Cam Sutton made an interception that all but sealed the win for the Steelers. Grade: A

Special Teams
The Raiders did have one long punt return, but its impact was limited. Kick coverage was good and Steven Sims fair caught all but one punt. Pressley Harvin was solid on his returns. Chris Boswell did make two field goals, but he also missed to more. Yes, weather was a factor, but kicking at Acrisure Stadium should be his specialty. Grade: C-

Coaching
Matt Canada’s offense struggled for much of the night and one has to question why the Steelers passed 39 times on a night with 9 degree weather. Still, had the field goals not been missed, the last minute drive wouldn’t have been necessary, but it was and his unit executed to perfection. 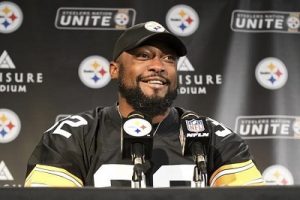 Teryl Austin’s defense made an immediate adjustment that neutralized the Raiders running game and his defense kept delivering even as the offense missed a field goal and punted 3 times in the second half alone.

They had a rookie quarterback and had been smacked around by the league’s heavyweights and up and comers a like. At this point the smart money was on Pittsburgh spending Christmas “competing” for a top 5 pick.

Instead the Steelers competed for a playoff spot on Christmas Eve. On a night when the Steelers celebrated the 50th Anniversary of the Immaculate Reception and said goodbye to Franco Harris, Mike Tomlin harnessed that emotion without letting his team get caught up in it. Grade: B+

Sung Hero Award
The Steelers tapped him to lead introductions carrying a Number 32 banner. When the game started, Cam Heyward showed why he was worthy to carry on Franco Harris’ legacy, with two sacks, a pass defensed, another tackle for a loss and numerous others for no or little gain, and for that he wins the Sung Hero ward for the 2022 win over the Raiders at Acrisure Stadium.