Taken from the grade book of a teacher sad to see summer starting so early, but encouraged by his students 2nd semester spring, here is the Pittsburgh Steelers Report Card for their win over the Cleveland Browns in the 2022 season finale. 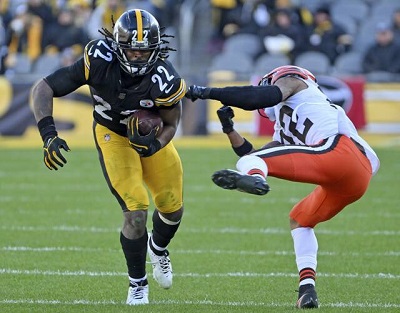 Quarterback
Kenny Pickett completed 13 of 29 passes for 195 yards and a touchdown with no interceptions. Pickett wasn’t perfect. There were times when he tried to force the ball to receivers while others were open, and his deep passes were off target. But the Steelers converted 9 of 15 third downs, with Pickett convert 3 third downs on their final drive. Grade: B+

Running Backs
Najee Harris had 84 yards on 23 carries and his 3.7 yards per carry average doesn’t due justice to the fight he show and his ability to force piles to fall forward. Harris also caught one pass for 10 yards, while Derek Watt ran once for one yard and a touchdown. Grade: A-

Tight Ends
Pat Freiermuth had two targets but no catches for the first time in memory. Zach Gentry had on catch, but it was for 23 yards and helped jumpstart the Steelers first touchdown drive. The real star here was Connor Heyward, who 3 catches on 4 targets two of which converted third downs on the final touchdown drive. Grade: A-

Wide Receivers
George Pickens caught 3 passes for 72 yards on six targets and may have gotten screwed out of a completion on the sidelines. But Pickens came up with clutch catches, whether in the end zone or on third down. Diontae Johnson will close the 2022 without a regular season touchdown, but he did catch 2 passes on 10 targets in addition to a two point conversion. Steven Sims had one jet sweep for 16 yards, while Gunner Olszewski and 2 for four yards. Grade: B

Offensive Line
Kenny Pickett was only sacked once and only hit twice, impressive considering the presence of Myles Garrett on the other side. The run blocking could have been a little better, but the Steelers ran the all when they needed to. Grade: B

Defensive Line
Nick Chubb averaged 6.4 yards a carry – but never got into a rhythm thanks in part to the Steelers stuffing him on other carries. Cam Heyward had another age-defying day leading the unit with 8 tackles, 4 QB hits, 1 batted pass and 2 sacks. Actually, it should be 3 sacks, but he was flagged for roughing the passer on a make up call for Larry Ogunjobi’s uncalled face mask on his sack. Grade: B+ 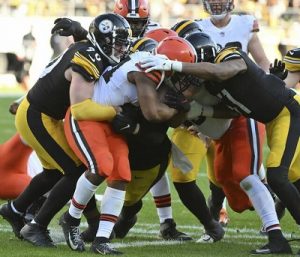 Linebackers
Robert Spillane and Alex Highsmith led the unit with 8 tackles apiece, with Highsmith adding 2 and half sacks and 3 QB hits. T.J. Watt had half a sack and while he wasn’t credited for a tackle for a loss, he did have several for no gain. Myles Jack had four tackles while Mark Robinson saw more action but blitzed when he should have stayed in coverage leading to a long pass on a scoring drive. The linebackers did well, but let Deshaun Watson slip through their fingers too many times. Grade: B

Secondary
The Browns were 5-12 on third down with long passes of 38 and 36 yards. Levi Wallace changed the game with his interception before the half, killing Cleveland’s two minute drill and allowing Pittsburgh to take the lead. Damontae Kazee’s interception in the 2nd half confirmed, allowing the Steelers to add 10 points in mere minutes. Minkah Fitzpatrick had 10 tackles while James Pierre and Cam Sutton had a pass defense. Grade: A-

Special Teams
The Browns only average 18 yards per kick return but did have one 35 yarder, plus a longer won that negated by a penalty. Chris Boswell hit both of his field goals Steven Sims did a respectable job returning punts, and the Steelers punt coverage was solid. Grade: B

Coaching
Will this be Matt Canada’s last game as Steelers offensive coordinator? Mike Tomlin wasn’t saying at his season ending press conference. If it was Canada’s final game, it will have been the best outing for his offense.

No one would mistake Canada’s offense in the finale for, say, the explosive 1995 Steelers offense that featured “Slash,” but Pittsburgh executed a balanced plan, controlled the clock and despite some early hiccups, finished drives in the Red Zone. “Chunk plays” were still spared, but at they also took shots down field.

Teryl Austin closed the season with a strong effort. The Browns only put 13 points on the board and, while the decision not to handoff more to Nick Chubb is a bit of a head scratcher, the numbers say that Austin’s defense limited his effectiveness.

One thing Austin will have to do in future meetings is scheme better to prevent Watson from breaking out, as he did that far too often.

Mike Tomlin earns some criticism for not challenging the first touchdown run, as a score there could have set up a blowout. Even if the offense did fumble the ball away two plays later, the defense forced a punt, revealing a team that was mentally prepared to execute in the biggest game of the season. 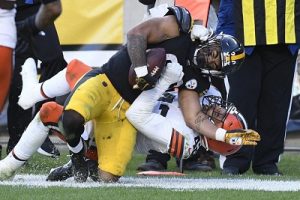 Jaylen Warren wills himself to a 1st down. Photo Credit: Karl Roser, Steelers.come

As Tomlin himself concedes, the Steelers 2022 evolutionary process now comes to a “screeching halt” but his team is peaking as the season ends, which is always a sign of good coaching. Grade: A

Unsung Hero Award
George Pickens will likely earn ESPN highlights for his catch. Connor Heyward will turn heads. But this player caught the ball — well behind the line of scrimmage — on third down with his QB getting hit, and while he was in a sea of Brown jerseys and yet willed himself a 1st down on a drive that ended with the Steelers touchdown. For that Jaylen Warren win the Unsung Hero Award for the 2022 season finale win over the Browns.