Of the five Rooney brothers, John Rooney held one of the lowest profiles with respect to the franchise. Yet, despite that low profile, John Rooney did play an important role in shaping the Pittsburgh Steelers that we know today.

Here we’ll take a look at that role as well as his larger life. 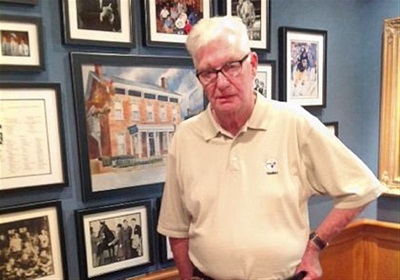 John Rooney is the youngest son of Steelers founder Art Rooney Sr. and his wife Kass, having been born in 1939, the second of twins. John, like his brothers Dan, Art Jr., Tim and his twin Pat, when to the North Sides’s St. Peter’s Catholic School and then to North Catholic (where Tom Donahoe and Kevin Colbert also graduated.)

John and his brother Pat studied at Mt. St. Mary’s College, in Emmittsbrug, Maryland, graduating in English. From there he went on to teach English in Plum Boro. John later revealed to author Jim O’Brien for his book 2002 The Chief:

Teaching was the most rewarding job I ever had. I never had another job where you got a rush every day about what you were doing to compare with that. You looked into the faces of the students and you saw that something was coming through. Some learning was taking place. You didn’t get that same sort of rush in business.

But as the father needing to support six kids, Rooney was forced to go into business. He moved to Philadelphia to work in the family’s race tracks, coming home in the summer to help with Steelers training camp.

Rooney admitted to O’Brien that, he like his other brothers wanted to work for the Steelers, “But the door wasn’t really open to anyone but Dan. The rest of us knew – it was made pretty clear to us – that we had to find something different to do.”

Art Rooney Sr. knew that sports franchises could hold the allure of a narcotic. As Ed Bouchtte detailed in Dawn of a New Steel Age, when Art Sr. once asked his son Pat “What are you doing here?” when he saw him show up at Three Rivers Stadium for a Steelers game, reminding him that his part of the family business was in Philadelphia.

And while Art Jr. oversaw some of the most successful drafts in NFL history, including the 1974 draft that netted 4 Hall of Famers, communications breakdowns between Chuck Noll and Art Jr. forced Dan to fire his brother in 1986.

Art backed Dan’s decision, true to his “There can only be one boss,” philosophy, but as John confided to O’Brien, “It was difficult for the rest of us when Dan decided that Art didn’t fit into the football picture anymore. That was difficult for my father to accept.”

Although he had no other formal involvement of running of the Steelers, John did inherit 16% of the team when Art Rooney Sr. died in 1988,  setting up to play an important, if not critical role in shaping the structure of the franchise today.

While the Rooneys are known for their association with the Steelers, they’ve long been dominant players in the race track business. John Rooney helped run tracks in Philadelphia and then Florida along with his brother Tim. And, as John admitted to O’Brien, the tracks were more profitable than the Steelers in the 60’s and 70’s.

This ran afoul of the NFL’s anti-gambling bylaws (my, how times change) leading Roger Goodell to force the Rooneys restructure the team’s ownership to get into compliance.

Dan Rooney made his brothers an initial offer, and when they didn’t find that satisfactory, they sought outside investors. Stanley Druckenmiller leapt at the chance to get a piece of his favorite team, and made the four Rooney brothers an offer.

When it came time to make a decision in the fall of 2008, the brothers couldn’t reach a consensus, but that John Rooney “’argued for his brothers to take Dan Rooney’s offer at their meeting, but no decision was made on that matter.’”

The brothers did eventually come to an agreement to the bulk of their shares to Dan and his son Art II and it is certainly possible, perhaps probably that they would have done so anyway, but John’s steadfast support of his older brother certainly helped ensure the franchise’s stability in the face of Druckenmiller’s takeover attempt.

The final deal saw John Rooney retain and 8% stake in the franchise, which was further reduced to 1% in 2015.

John Rooney is survived by his wife JoAnn, his kids Sean, Mary Jo, Alice, Peter, and Matt. He was predeceased by his son Jimmy, whom he lost in a car accident. Our thoughts and prayers are with the entire Rooney family.