As the first week of their 2023 off season closes, the Pittsburgh Steelers have already signed 17 players to “futures” contracts and none more intriguing than Anthony McFarland. The Steelers drafted Anthony McFarland out of the University of Maryland in the 4th round of the 2020 NFL Draft. 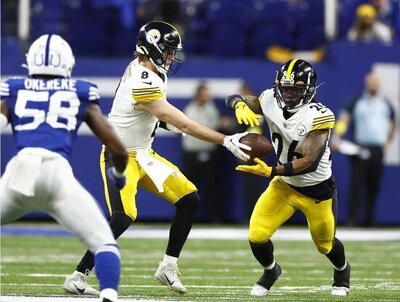 McFarland was an enticing choice, a smaller faster back, the type of back which the Steelers had tried and failed to add in Chris Rainey in 2012 and Dri Archer in 2014. And for the next two years, McFarland followed in their footsteps.

As a rookie, McFarland appeared in 11 games and had 33 carries. He was a footnote in an offense that struggled to run the ball. That dropped to two games and 3 carries in 2021, the second of which consisted of mop up duty in a blowout loss to Cincinnati.

But an injury to Jaylen Warren got Anthony McFarland elevated from the practice squad for the Colts game, and an in-game injury to Najee Harris helped get McFarland on the field. And while his 41 all purpose yards on 8 touches hardly makes him a Fantasy Football star, for the first time Anthony McFarland looked like he belonged in the NFL.

NFL teams routinely sign and release players to and from futures contracts at this time of year, so there’s no assurance that McFarland will still hold a roster spot when the 2023 NFL Draft arrives, let alone with the Steelers start training camp at St. Vincents. 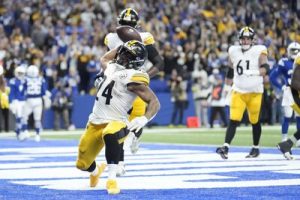 But the Steelers decision to resign Anthony McFarland is and under that radar signal of their commitment to running the the ball will continue in 2023.

Mike Tomlin has been infamous for rushing his running backs “until the wheels come off” (see Willie Parker, Le’Veon Bell and to a lesser extent Rashard Mendenhall), yet refused to staff deep backfields behind his starter.

That changed in 2022. When injuries felled both Harris and Warren against the Colts, Benny Snell and Anthony McFarland stepped in, providing the foundation that allowed Kenny Pickett to stage his first comeback. This is the first sign that the change will continue.

Anthony McFarland was only 1 of 16 players to sign or resign with the Steelers. Ten of the players who’ve inked futures contracts spent all or part of the 2022 season in Pittsburgh on the practice squad:

If nothing else, with Cam Sutton, Terrell Edmunds and Damontae Kazee all headed for free agency, the Steelers are adding quantity to their defensive backfield.