January 5th certainly is a momentous day in Steelers history. Thanks to the magic of social media yesterday I was reminded that January 5th was:

All three events were important in shaping the Pittsburgh Steelers as we know them today. All three are worthy of memory and celebration.

But one offers an important lesson for Steelers fans, if not the organization itself today in January 2023. And that is Tommy Maddox’s playoff rally. 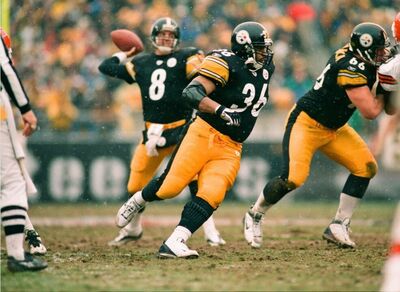 Tommy Maddox drops back in the 2002 Steelers playoff game against the Browns. Photo Credit: Steelers.com

For a full accounting of the Tommy Maddox, aka “Tommy Gun” story click here to read Tony Defeo’s retrospective on the Steelers 2002 season. If you don’t have time, here’s the digest version:

Kordell Stewart had quarterbacked the 2001 Steelers to the AFC Championship game and won team MVP honors after stepping up following Jerome Bettis‘ midseason injury. So Kordell appeared set as the starter going into 2002.

However, the Steelers started 0-2, Kordell looked bad, and Bill Cowher opted to bench Stewart in favor of Maddox in week three in the name of giving the team a proverbial “spark.”

Maddox led the team to a win in overtime, Cowher opted to stick with a hot hand, and the 2002 Steelers won their final first AFC North crown, brining up a wild Wild Card game at Heinz Field.

Bill Cowher’s Steelers defenses of the 1990’s had carried a reputation for their “shut down secondaries.” But Bill Belichick and Tom Brady opened the 2002 season exposing the Steelers secondary as a shell of its former self (hence Kevin Colbert trading up to get Troy Polamalu that next spring, but that’s another story.)

The Browns exploited that weakness to jump ahead 14-0 and kept it a two score game for the first 45 minutes of play. They opened the 4th quarter with a 27 to 14 lead, and held 33 to 21 lead with just over ten minute left.

An Antwaan Randle El pass complete to Jerame Tuman completed the 2 point conversion, the Steelers defense held on for what Dan Rooney described as one  of the most exciting playoff wins in Steelers history. 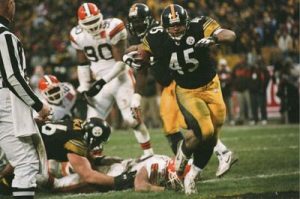 And it was exciting. It also seemed to cement Tommy Maddox’s status as the Steelers franchise QB. Dan Rooney, per Bob Labriola, seed to have come to a similar conclusion, after spending much of the game “Making a list” which he balled up and threw away at after the Steelers beat the odds with their comeback win.

For my money, I thought the game proved that Tommy Maddox had the most important intangible quality a quarterback can have — mental toughness. Heck, according to urban legend, Maddox himself stood in the huddle, down two scores with 5:30 left to play and said, “Alright. We got ’em where we want ’em.”

But of course Tommy Maddox wasn’t the Steelers answer at quarterback. He had a rough go of it as the Steelers struggled throughout the 2003 season, leading Pittsburgh to draft Ben Roethlisberger in 2004. 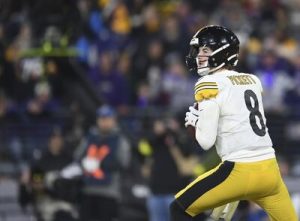 Kenny Pickett has had a tremendous rookie year. The poise and acumen he’s show in orchestrating game winning drives against the Colts, Raiders and most impressively the Baltimore Ravens on the road at M&T Bank Stadium IS impressive.

Mike Tomlin and Omar Khan should proceed into the 2023 off season with the assumption that the Steelers have found their franchise QB in Kenny Pickett. Fans should also keep that in mind whenever the Steelers decline to make some sort of inane trade with Green Bay should Aaron Rodgers throw one of his “I’m not sure I want to be a Packer anymore” tantrums.

But fans should also remember the lesson Tommy Maddox left us – the true test of a quarterback isn’t whether he can author on successful season but several.