In a few hours the 2021 Pittsburgh Steelers will take the field at Arrowhead Stadium against the defending AFC Champion Kansas City Chiefs in the Wild Card game. Suffice to say, no one thought they would be here three weeks ago when the Chiefs scalped them 36-10. 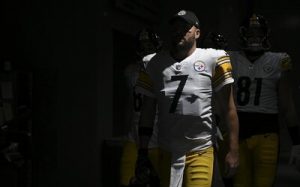 If the Vegas odds makers are right, the Chiefs will make quick work of the Steelers, ending Ben Roethlisberger’s last playoff ride as one and done. But it says here that regardless of result, Pittsburgh was right to prioritize playoffs over draft picks.

That shouldn’t need to be said and right now for the most part it doesn’t, but an ugly loss will likely change that. It shouldn’t.

I think that it was late in the 2013 season when someone broached the idea of playing for draft position to Mike Tomlin, and Tomlin scoffed, responding, “As long as we keep score, I’m trying to win.” Good for him.

That’s the operating philosophy of the Pittsburgh Steelers, and that was evident when, facing salary cap Armageddon and an aging quarterback clearly closing in on his “Life’s Work,” Art Rooney II opted to have Kevin Colbert and Mike Tomlin build the best roster they could. (And if you look at who everyone thought the Steelers would have after the draft, they didn’t do a bad job – but that’s another story.)

There are plenty of others that do not. Take the Miami Dolphins. If Pro Football Talk’s Mike Florio is right, the main reason why Brian Flores got a pink slip from Dolphins owner Stephen Ross is that he won too much.

The first part of the plan appeared to be working, as the Fins jettisoned talent, including Minkah Fitzpatrick and lost their first 8 games. But then Flores committed a boo-boo by winning 5 of his last 8 games. That cost Miami Joe Burrow.

You see, bereft of dynamic talent like Minkah Fitzpatrick, Brian Flores found a way to get more out of his players and won games. Silly me, I thought that this is what a good coach was supposed to do. Stephen Ross would beg to differ, it seems.

But if Florio’s reporting is correct (and that’s an IF) I’m just glad that Art Rooney II does think that way, because playing for draft position is overrated.

The Perils of Playing for Draft Position

Barring a miracle, the Ben Roethlisberger Era will end without a third ring. And it says here that one of the main reasons for that was that when the Steelers picked Ben in 2004, they already had a Super Bowl ready roster (although I don’t think anyone, even the Rooneys, realized it).

Then Aaron Smith, Joey Porter, James Farrior, Marvel Smith, and Willie Parker getting old happened. That was a problem because rebuilding around a franchise quarterback is difficult, because a franchise QB gives you a couple of three wins per season. 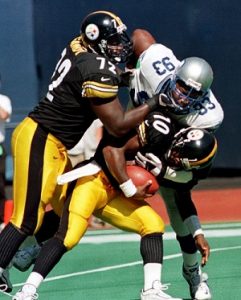 Switch Ben Roethlisberger for Kordell Stewart on the 1998 and 1999 Steelers squads and they probably both finish at least at 8-8 instead of 7-9 and 6-10.

Look at the New York Jets. While the franchise hasn’t tried to tank, they’ve nonetheless picked in the top 10 slots in the draft 10 times since 2000. Yet where has that gotten them? Washington has enjoyed good draft position in almost every year since Daniel Snyder took control of the team. How many playoff games have they won?

Think of how the Jarvis Jones and Artie Burns picks set the franchise back. But good players remain available in every round. And teams that play to win have a way of finding them. Who are the best players on the Steelers defense this year? Cam Heyward and T.J. Watt.

The Steelers got Alan Faneca with the 26th pick of the draft and also found Hines Ward in the 3rd round ft and Deshea Townsend in the 4th round of the 1998 NFL Draft. That triplet of players counts 5 total Super Bowl Rings, one Super Bowl MVP and one bust on Canton. 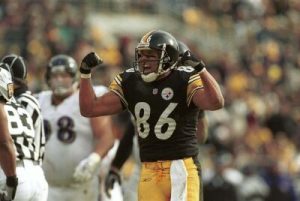 Hines Ward flexes his muscles in the playoffs against the Ravens. The Steelers were back!. Photo Credit: Steelers.com

When I was very young, I saw a NFL Films clip on the SOS “Same Old Steelers” that commented on Bill Austin’s effort in the 1968 NFL season. The conclusion was, “The Steelers were so bad, they didn’t even know when to lose.”

That’s because by winning a few games and tying another during a disastrous 2-11-1 1968 season, Bill Austin cost the Steelers the right to draft O.J. Simpson.

Talk about a tragic mistake. The Pittsburgh Steelers a franchise that had won NOTHING in 40 years, cost itself a shot a drafting the great O.J. Simpson.

Oh, and by the way, Noll also got himself his own Hall of Fame running in 1972. Maybe you’ve heard of him. His name is Franco Harris.

As Jimmy Psihoulis assured us in the Western Pennsylvania Polka, “…Good things come to those who work and wait.”

Jimmy Pol was right. The Steelers face long odds against the Chief and face even longer odds in their quest to win Super Bowl LVI.

But they are damn right to do everything in their power to try.

The Pro Football Hall of Fame Selection Committee has announced the 25 finalists for the 2016 Hall of Fame class. In his first year of eligibility former Pittsburgh Steelers guard Alan Faneca has made it to the semifinalist round, and is joined by other recent retirees, Brett Favre and Terrell Owens.

Former Pittsburgh Steelers defensive back, emergency quarterback, and defensive coordinator Tony Dungy has again made it to the semifinal round, as has former Steelers linebacker Kevin Greene.

Unlike defensive players, and offensive “skill” players, there are no statistics to measure the work of offensive lineman. Yet it is there toiling in the trenches that allows the quarterbacks, running backs and wide receivers to amass the video game like statistics that keep Fantasy Football owners happy. Alan Faneca was one of the better offensive lineman, and arguably the best guard in Steelers history.

Lacking any stats to back up his claim, let’s just show you a piece of his finest handiwork (YouTube video available as of 11/25/15):

Everyone remembers Willie Parker’s 75 yard scamper to the end zone on Super Bowl XL. But what’s less memorable, but no less important, is that Alan Faneca made that play possible by pulling, and totally eliminating the Seattle Seahawks defender from the play, creating a giant hole for Fast Willie to run through.

The current group of 25 finalists will be narrowed further to a group of finalists, who will be debated by the Hall of Fame selection committee and announced prior to the Super Bowl. In recent years former Pittsburgh Steelers have suffered from the “Already too many Steelers in the Hall of Fame” bias, which likely delayed the entry of Jerome Bettis and Dermontti Dawson into the Hall of Fame.

Both Tony Dungy and Kevin Greene have been NFL Hall of Fame Semifinalists and finalists several times before, but have failed to make the cut as finalists. The Pittsburgh Steelers signed Tony Dungy as an unrestricted rookie free agent out of Minnesota in 1977.

Dungy, who’d played quarterback in college, spent a week working with the Steelers as a wide receiver before Chuck Noll decided to shift him to safety. Dungy remained at safety for two years with the Steelers, aside from a one game stint as Steelers emergency quarterback in which he managed to complete passes to both Lynn Swann and John Stallworth.

The Steelers traded Dungy to the San Francisco 49ers after Super Bowl XIII (after Dungy had made the game-saving on-sides kick recovery).In 1981 Chuck Noll hired Tony Dungy as a defensive backs coach, and promoted him to defensive coordinator in 1984 making him both the youngest coordinator in the league at that time, and the first African American coordinator.

The Pittsburgh Steelers signed Kevin Greene as an unrestricted free agent from the Los Angeles Rams in the spring of 1993. In Pittsburgh, Greene made the switch from defensive end to 3-4 outside linebacker, where he started 48 games and 35.5 sacks.