“Records are made to be broken.” John Stallworth, during the Steelers 75 Anniversary Game

John Stallworth’s was responding to a question about whether he felt jealous about Hines Ward  breaking all of his receiving records with the Steelers. Stallworth admitted he’d sent Hines a letter. “What did you say?” the reporter inquired, 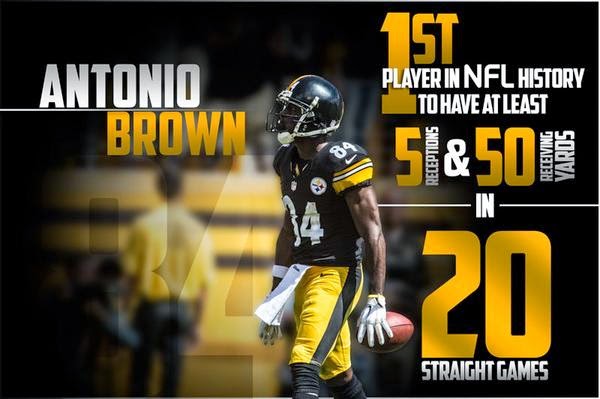 “Stop breaking my records young man!” Stallworth joked, and then went on to talk about how great it was to have is record broken by Hines.

The Steelers 75th Anniversary Game gave cause for celebration in Steelers Nation as did the night less than two years earlier when a pass from Antwaan Randle El pushed Ward beyond Stallworth in the total receptions category. Aside from the record, the Steelers defeated the Browns 34-21 and improved to 7-2.

Individual Pittsburgh Steelers are still breaking records, but the stars can’t seem to line up to make it cause for celebration. In 2011 Ward crossed another threshold when he reached the elusive 1,000 receptions mark. Ron Cook of the Post-Gazette said 1,000 catches should cement Ward’s status as a great.

While it was a triumphant moment, the milestone also marked how far Ward had fallen. Browns fans have even taken to mocking it on YouTube.

Last year Ben Roethlisberger did some record breaking of his own, breaking Terry Bradshaw’s career touchdown passing record. Unfortunately, the event happened as the Steelers were getting embarrassed by a Miami Dolphins team quarterbacked by a player who’d never seen snow.

But he did break an NFL record last week by becoming the NFL’s first player to have at least 5 receptions for 50 yards in 20 straight games.

Heath Miller passed Lynn Swann as the Steelers 4th all time receiver. The Pittsburgh Steelers even went as far as to tweet the infographic above. Which is fine, but its also safe to say that no one in Steelers Nation feels like celebrating after a loss as bad as the Tampa loss.

What does James Harrison share with Neil O’Donnell not to mention John Jackson, Myron Bell, Oliver Gibson, and Jamain Stephens?

If you guessed that he was an ex-Steelers who wound up as a Cincinnati Bengal then you’d be spot on.

Allen Robinson of the Pittsburgh Tribune Review is reporting that the Cincinnati Bengals signed James Harrison to a 2 year contract. Terms were not disclosed, although it is likely for less money than he left on the table when Steelers tried to get him to accept a 30% pay cut. When Harrison balked, the Steelers cut him, and Harrison has been trying to land a job with another AFC North team since then.

Harrison himself tweeted the news, showing he’s already incorporating lingua franca of The Jungle into his vocabulary.

In an trivial twist to the story, Behind the Steel Curtain is citing an ESPN report that says that Harrison will not actually sign the contract until May.

With the acquisition of Harrison, Cincinnati cements what is one of the more underrated defenses in the NFL. Unlike Pittsburgh, the Bengals play a 4-3 and how Harrison exactly fits in is unknown but the Bengals already have formidable players such as Gino Atkins, Michael Johnson and Carlos Dunlap in what is one of the strongest front 7’s in the league.

That cannot be a reassuring thought for Ben Roethlisberger, who must doubling down on his rosary decades, praying that the investments the Steelers have made in Marcus Gilbert, Mike Adams, and David DeCastro pay off in the form of them developing into players capable of protecting him.

Thanks for visiting. Click here for the rest of Steel Curtain Rising or here to see our Steelers 2013 Free Agent Focus.
Please lend a hand by sharing this on Facebook, Twitter, WhatsApp etc... Thanks.

…But that could change fast.

You may have heard of him. He goes by the name of “James Harrison” although the monikers “Deebo” and “Silverback” often get attached to his signature 92. In case you’re fuzzy, here are a few of his accomplishments:

And the phrase “James Harrison Pittsburgh Steeler” could also soon be history.

The Steelers extended James Harrison’s contract in the 2009 off season with a deal that acknowledged Harrison had played cheaply prior to that point. It was also backloaded.

The Steelers will pay out 6.57 million dollars in 2012, but his salary cap value is closer to 10 million due to prorated bonuses. The Steelers want need to reduce his cap hit. The easy way to do that is with an extension/restructure.

That’s problematic as neither side figures Harrison would play additional years.  And Kevin Colbert indicated in his pre-free agency chat with the press that the Steelers would restructure contracts (and they did for Lawrence Timmons, Ben Roethlisberger and Antonio Brown) but that they were reaching the limits of their ability to restructure contracts.

As Ed Bouchette has reported in the Pittsburgh Post-Gazette, the Steelers are asking Harrison to take a pay cut. The Steelers have done this with veterans before, most notably Jerome Bettis.

But Bettis was willing to take one for the team. He wanted to win a Championship and Super Bowl XL rewarded him for his faith.

The two sides, reports Bouchette, are at an impasse. Harrison’s agent, Bill Praise, is saying all of the right things about Harrison wanting to be a Steeler. The Steelers are mum.

To do that they need money. They can restructure LaMarr Woodley’s contract, but they don’t want to do that.

The Steelers don’t want to do that because James Harrison still has something left, and he’s still better than Jason Worilds.

The two sides are still talking, but the clock is ticking….

Thanks for visiting. Click here for the rest of Steel Curtain Rising or here to see our Steelers 2013 Free Agent Focus.
Please lend a hand by sharing this on Facebook, Twitter, WhatsApp etc... Thanks.

You will seldom see Steel Curtain Rising focus on a non-Steeler. But you will seldom find players who excel in their role as the Steelers nemesis as Steve McNair did.

How Good was McNair?

Steve McNair simply had the Steelers number. Those 11 wins as a starter do not include the day he ripped the heart out of much of Steelers nation.

It was the third game of the 2000 season. The Steelers had already dropped two games, first getting their teeth kicked in by the Ravens, and then losing a heartbreakers against the Browns. The defending AFC Champion Titans were coming for their last visit to Three Rivers Stadium.

McNair could not start. Neil O’Donnell stood in his place. Heavy underdogs, the Steelers went toe-to-toe with the Titans. Pittsburgh and had the upper hand going into the games’ final moments. Jason Gildon slammed Neil O’Donnell to the turf. Number 14 stumbled to his feet with blood streaking down his face.

Steve McNair had other ideas. He replaced O’Donnell, and with just three passes and two runs brought the Titans from behind and led them to victory.

Perhaps it’s fitting that the only time that the Steelers present-day rival Baltimore Ravens ever swept the series was 2006, the year they were quarterbacked by Steve McNair.

Steelers Nation did gain a modicum of revenge in 2007, when they thoroughly dominated both McNair and the Baltimore Ravens during the team’s 75th Anniversary celebration.

While Steelers fans did savor that victory, now none of it matters.

McNair, who retired at the end of the 2007 season, was found shot dead in Nashville, Tennessee on Saturday July 4th. Although Steel Curtain Rising certainly does not celebrate McNair’s success on the field against the Steelers, we do recognize that he was a true competitor and honor him as a proven winner.

We hope that the rest of Steelers Nation will join us in offering our thoughts and prayers to McNair’s wife Mechelle and his four sons.