The Pittsburgh Steelers closed the 2022 NFL Draft exactly the way they started it: By Drafting a quarterback. Using their 2nd pick in the 7th round the Steelers picked Chris Oladokun, from South Dakota State. 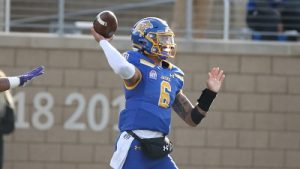 Chris Oladokun actually began his college career at South Florida, playing there in 2017 and 2018. He transferred to Samford and then got a graduate degree South Dakota State. In his final year he threw 3,164 yards, 25 touchdowns, and 7n interceptions in 2021 while also rushing for 166 yards and also had two touchdown receptions.

Kevin Colbert confirmed that the Steelers brought him in for a pre-draft visit, where he impressed the Steelers with his off the field “demeanor.”

With first round draft pick Kenny Pickett, free agent Mitchell Trubisky and veteran Mason Rudolph already in the quarterback room, Chris Oladokun would appear to have little chance of making the team.

However, there’s a possibility that the Steelers won’t want to keep Rudoph or Trubsiky as a 3rd string quarterback, and the Steelers are a team that believes in three quarterbacks so that could open a spot for Chris Oladokun.