Taken from the grade book of a teacher who, if nothing else, is happy to see one half of his class picking up the slack when the other half stumbles, here is the Steelers Report Card for the 2019 win over the Bengals at Paul Brown Stadium. 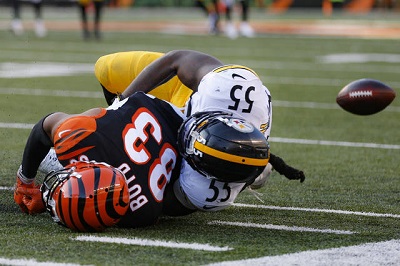 Quarterbacks
On the first two drives preceding his interception, Mason Rudolph looked OK. After the interception, Rudolph was tentative and played poorly. Devlin Hodges stepped in and connected on his first 2 throws, the 2nd of which went for a touchdown. Which means he was 3 of 9 on the rest of the day….. Grade: C-

Running Backs
The Steelers effectively deployed 4 running backs to rush for a combined total of 160 yards, a season high for the team. Kerrith Whyte ripped off a few impressive runs, as did Trey Edwards. Jaylen Samuels had 2 carries and 3 catches. Overall, a solid game by the Steelers running backs. Grade: B

Tight Ends
For unknown reasons, it is pretty clear that the Steelers tight ends won’t play much of a role in the 2019 passing game, as Vance McDonald had 1 yard on 1 catch for 1 target. Nick Vanett did not get targeted. Grade: C

Wide Receivers
While he’s a long way from being a superstar, with each week James Washington seems to inch up his game a notch and every week he makes an important contribution. Diontae Johnson had 3 catches on 6 targets but all went for short gains. Deon Cain’s 1 catch for 35 yards set up the Steelers first field goal. Tevin Jones had 1 catch for 9 yards on 3 targets. Grade: C+

Offensive Line
On the plus side, after giving up 2 holding penalties and 1 false start against the Browns, the Steelers offensive line didn’t get flagged for either penalty. And when the game was on the line, the Steelers offensive line delivered the run blocking that was needed. Cincinnati knew it was coming and couldn’t stop it. On the negative side, the Bengals had 6 tackles for losses, registered 3 sacks and laid on 7 more QB hits. More quality and more consistency is needed. Now. Grade: C-

Defensive Line
Cameron Heyward is a monster. Heled the team in tackles, registered a sack, had a hand in two tackles for losses and hit Ryan Finley 4 more times. Javon Hargrave had 4 tackles. Outside of a few runs late in the game, Joe Mixon wasn’t a factor in the game, and that starts with the line. Grade: A-

Linebackers
T.J. Watt had a strip sack and remained in the game following a bone bruise. Bud Dupree was quiet for much of the game, until he ended it with a strip sack of his own. Mark Barron had an almost safety. Devin Bush authored the biggest play for the linebackers when he forced a fumble by Tyler Boyd and Pittsburgh’s 8, changing the game for good. Grade: A

Secondary
And who just happened to scoop up the fumble Devin Bush caused? Minkah Fitzpatrick who had concentration needed to stay in bounds and return it 36 yards. Joe Haden defended 3 passes, including two of which came during the game’s final moments. Mike Hilton also got a hand on three passes of his own. Steven Nelson tipped away another pass. Terrell Edmunds and Joe Haden gave away successive big pass plays which led to an easy score, which brings this group’s grade down. Grade: A-

Special Teams
Diontae Johnson returned 4 punts for 5.3 yards, while the Steelers punt coverage was sound. Kerrith Whyte didn’t do much on his first kick return, and the Steelers gave up an average of 23.5 yards on kick returns. Until the Steelers can managed to get that average down, teams are going to continue returning kicks instead of taking the touchback.

Jordan Berry boomed off 7 punts that averaged 45.1 yards and, more importantly, nailed 3 inside the 20. Chris Boswell was a perfect 3 for 3 on field goals, including a 47 yarder. Grade: B+ 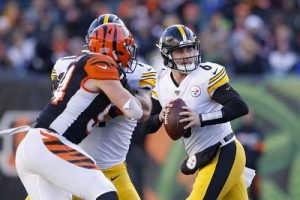 Coaching
The Steelers were playing one of the worst offenses in the NFL that, on top of that was, missing its best receiver. While Keith Butler’s boys didn’t quite pitch a perfect game, they did allow one touchdown that looked all too easy, they limited Cincinnati to 10 points. The Bengals went 2-12 on third downs, punted 9 times and suffered seven 3 and outs.

It is easy to criticize Randy Fichtner and his “one touchdown a game” offense. And to be certain, Fichtner has his faults. It’s also true that he was playing 6 players who’d been cut previously this season. It was not pretty, but the Steelers offense came from behind once, reestablished the lead another time, and then added insurance points.

Yes, it can give an offense and even an entire season a spark. See Tommy Maddox in 2002. Or it can blow up in a coach’s face (see Bill Cowher, Kordell Stewart and Mike Tomczak in the rain at Tampa in 1998).
Or the replacement quarterback can do just well enough to get by.

That’s what happened on Sunday afternoon. Devlin Hodges provided the Steelers with just enough spark to push the Steelers on to victory. However, Hodges hardly has a “hot hand.” Mike Tomlin will need to manage this with care moving forward, but on Sunday switching quarterbacks was the right decision. Grade: B+ 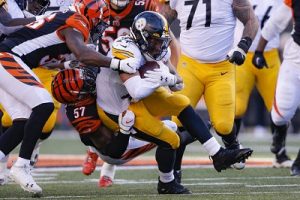 Unsung Hero Award
It was the Steelers best rushing effort of the season and their best rusher of the game brought his best when the game was on the line. He might have been held under 100 yards, clocking in at 98 yards on 21 carries, but 63 of those yards came on nine 4th quarter carries. The Steelers needed that type of effort to close with the win, and Benny Snell Jr. delivered it and for that he wins the Unsung Hero Award for the win over Cincinnati. 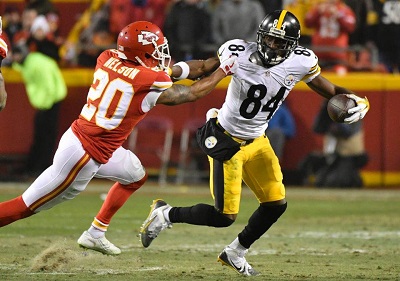 You’ll have to forgive me for my sour mood, but I haven’t been this angry after a Steelers loss in a very long time.

I’m talking about the Ryan Succup missed field goal at the end of regulation during the Chiefs/Chargers 2013 regular season finale that, had it been made, would have put Pittsburgh into the playoffs with an 8-8 record. 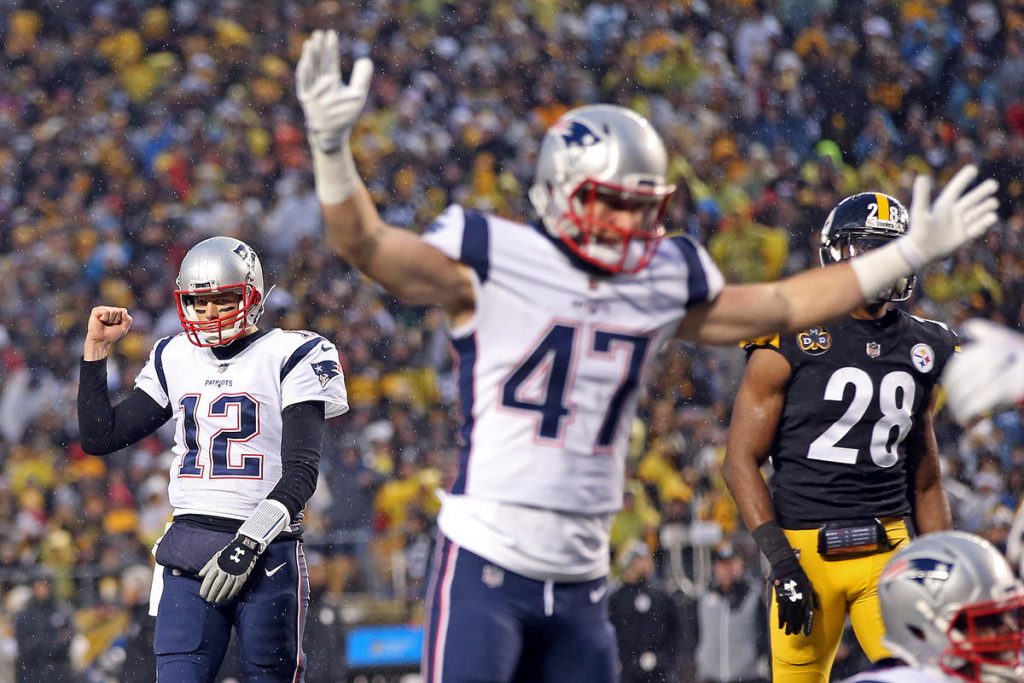 If I had to think of another time I was this angry, we have to go back almost 15 years, to the moments after Tommy Maddox‘s Steelers lost in overtime to the Tennessee Titans in the divisional round of the 2002 playoffs, thanks mostly to a running into the kicker penalty on Steelers cornerback Dwayne Washington, who ran into Joe Nedney, after Nedney missed a short field goal, thus affording the kicker with the great acting skills another shot at sticking the dagger into the heart of Steeler Nation (he did).

Anyway, in-case you’ve been living under a rock, the source of my current anger is the Ben Roethlisberger to Jesse James 10-yard touchdown catch with 28 seconds left that would have clinched a bye for the Steelers, a touchdown that was ultimately overturned due to the NFL’s ridiculous idea of what a catch is.

Was it the right call?

But there’s nothing you can do about it. Fortunately, however, unlike those previous anger-inducing moments I referenced, the Steelers can actually step up and do something about this clear miscarriage of justice.

The 27-24 loss to the Patriots, Sunday night, didn’t end Pittsburgh’s season; it merely dropped the team to 11-3 and took the control of the number one seed out its hands and placed it firmly into the Patriots’ with just two games left.

But the Steelers still control their own fate with regards to the number two seed and a bye, which, while not the perfect scenario, isn’t exactly chopped liver.

If the Patriots lose one game, while Pittsburgh wins two, the black and gold could still get the top seed in the AFC playoffs. And wouldn’t that be delicious? You lose-out on the head-to-head tiebreaker to both the Patriots and the Jaguars, who came into Heinz Field in Week 5 and had their way in a 30-9 beat-down, but it doesn’t matter, as you some how finish ahead of both in the win/loss column.

I would relish that, because I would welcome the opportunity to see both or either team have to come crawling back to loud and crazy Heinz Field for a playoff game, which, believe me, Heinz Field in a playoff setting is so much different than it is in the regular season.

But regardless of how the playoff seeding ultimately shakes out, the Steelers will actually be in the dance, and that angry feeling I have right now? That won’t last an entire offseason, and there’s still a chance for redemption.

The Steelers 2017 story isn’t over yet, and the final chapter can still go many different ways.