“Times change Myron,” was the quote Myron Cope used to lead off a chapter in his book Double Yoi. Dan Rooney supplied the quote in response to Myron’s protest over the Steelers decision to ban smoking effective January 1st, 1990 in the press room because secondary smoke had been bothering assistant coaches.

When Cope shared that story in his 2003 book, the memory of someone smoking (that’s tobacco smoking kids) in an enclosed era like a pro football press room was already anachronistic. Today its almost impossible to imagine that something like that ever occurred, let alone was ever “normal.”

What was the best play made last week by the Steelers defense in the win over the Saints? Levi Wallace’s interception? Perhaps Damontae Kazee’s pick? Maybe one of Alex Highsmith’s sacks? Or Robert Spillane’s stuff of Andy Dalton on 4th down? 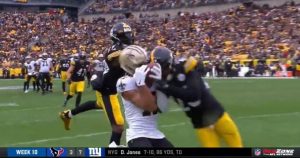 Chris Olave gets a big hit from Damontae Kazee after a tough catch. Photo Credit: Twitter

All good candidates indeed. But you know what? If a  DeLorean burned some rubber on Carson Street, and out strut an analyst from 20 years ago, there’s a fair bet they’d have told you the best play was Damontae Kazee hit on Chris Olave. Alas, thanks to Roger Goodell’s YouTube police, you can’t see the play on this site, but check it out on YouTube, we’ll wait.

Yes, that was one hell of a hit.

In another generation even though Olave held on to the ball, such a hit would have been though of as a tone setter. This isn’t hypothetical conjecture, it actually happened.

The high mark of the Steelers 1993 season came on November 15th, 1993 at Three Rivers Stadium where the Steelers shut out the Buffalo Bills 23-0. Early during the game, another Steelers reserve safety, Gary Jones, delivered this hit on long time Steelers nemesis, Don Beebe. Again, thanks to Roger Goodell’s YouTube police, you can’t see the play on this site, but check it out on YouTube, we’ll wait

It is the exact same kind of hit. The difference is that Kazee got flagged 15 yards for a personal foul, admonished on air by the commentators and then fined for the hit. Gary Jones? Well, you can hear Al Michaels, Dan Dierdorf and Frank Gifford talking about what great of a hit it was.