Taken from the grade book of a teacher hoping fire and fight he saw in a losing effort isn’t fools gold, here is the Steelers Report Card for the 2022 loss to the Eagles in Philadelphia. 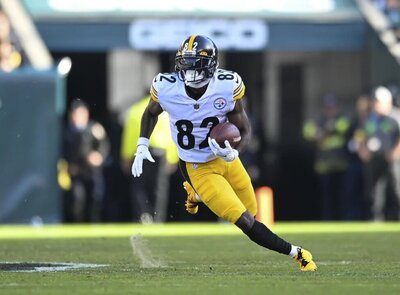 Quarterback
Kenny Pickett’s road got rougher in his fourth start to the tune of 6 sacks and 11 total hits. Pickett protected the ball, until he didn’t in the 4th quarter. He did some nice things, used the middle of the field more, but the Steelers 1-12 third down conversion rate in 1 touchdown says it all. Grade: D

Running Backs
Both Najee Harris and Jaylen Warren showed some fire and heart, but half of Harris’ 32 yards came on 1 run, while Warren had 6 carries for 50 yards. Harris added 6 catches for 26 yards while Warren had 3 for 25 yards. Derek Watt caught 2 passes including the only touchdown. The running backs weren’t a weak link, neither were they a strength. Grade: C-

Tight Ends
Pat Freiermuth led the Steelers with catches, but the fact that he clocked in at 4 should tell you what you need to know about the Steelers offense. Zach Gentry caught one pass for 3 yards. Grade: C

Wide Receivers
Chase Claypool had four catches and one pass for a touchdown. Diontae Johnson had 5 catches for 35 yards and probably should have drawn a pass interference penalty. George Pickens had three targets, he couldn’t come into bounds on one, got a ticky-tacky penalty on another and didn’t bring in a final catch. The Steelers needed more. Grade: C-

Offensive Line
The slow, but steady progress the Steelers offensive line had been making came to a crashing halt in Philadelphia. Early on the Steelers running backs had no room to run, something that didn’t change until the draw plays started. Pass protection got worse as the game wore on. Even at its best it would have been rough sledding against the Eagles. The line was at it worst. Grade: F

Defensive Line
The line came up big late in the 2nd half when Carlos Davis and Cam Heyward logged sacks to force a Philly punt. But the line could not pressure Jalen Hurts for the rest of the afternoon, and gave up some rushing yardage late in the game when the Steelers still had a theoretical chance to win. Grade: C-

Linebackers
A quiet day for the unit Robert Spillane and Myles Jack led in tackles with Alex Highsmith rendered a non-factor. Grade: D

Special Teams
Replacement kicker Nick Sciba was perfect on his kicks, but his kickoffs left a lot to be desired. Pressley Harvin had a solid day punting and Steven Simms had a solid day returning. Return coverage was sound.

Gunner Olszewski made a gutsy play that showed a lot of spirit and the Steelers converted a fake punt thanks to Marcus Allen. Grade: B

Coaching
Ooh, this one was ugly.

But if you look at the 3 bombs the Steelers secondary gave up in the first half, Teryl Austin’s defensive backs were in the right places, they just didn’t make plays. Still, the inability to mount any semblance of a pass rush was part of what allowed Jalen Hurts make it look easy.

For yet another week, the unit only scored one touchdown, and if you credit Matt Canada’s creativity on the play, you also have to question why it was necessary, coming on 4th down by virtue of a penalty. 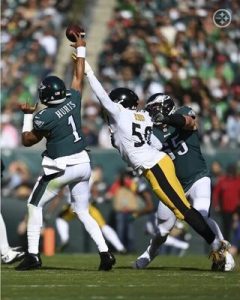 It would be insincere to suggest that, absent the penalties, the Steelers offense could have given the Eagles a run for the money. That’s probably not true. But penalties continue to short-circuit drives week-in-and-week-out.

Credit Mike Tomlin for keeping his guys burning with fire and fight until the better end, but that fire and fight didn’t make them competitive in this game, nor does it him on this Report Card. Grade: F

Unsung Hero Award
Standing in as a replacement player for a generational talent is unforgiving. And for the most part, this player has been quiet, but against the Eagles Malik Reed had a sack and pressured and got a hand on a ball that would have been another touchdown, and for that he wins the Unsung Hero Award for the Steelers 10th consecutive loss to the Eagles in Philadelphia.