Editor’s Note: This Outtake was written and distributed by email a few days after the 2007 Steelers 0-3 rain-soaked win over the Miami Dolphins at Heinz Field.

Mike Tomlin has talked the talk. Now it is time for him to walk the walk.

Since he’s been hired, Tomlin has been the toast of Pittsburgh, winning praise from fans, the local press* and national media alike.

Tomlin has said all of the right things. “I am a fundamentalist. I believe in winning by stopping the run and establishing the run.” “If you’re mentally weak you can use injuries and bye weeks as excuses for poor play. We don’t do that here.” And finally, “I am responsible for everything that happens on this team. That is a given.” 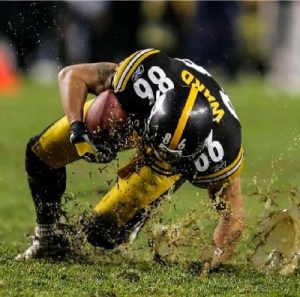 Hines Ward with one of his 9 catches. Photo Credit: AP Gene Puskai

Starting 8 and 3 is an accomplishment. But fast starts require strong finishes, last night’s game reveals a team at a cross roads.

The weather was the story last night. So be it. It was horrible, and you can’t draw too many specifics from a team’s performance under those conditions. But as Tomlin himself will say, both teams had to play in the muck.

The defense pitched a shut out. You can’t ask for more than that. Yes, the Dolphins did move the ball a little more than you’d like, especially to start the first half. Pressure was good, and when it wasn’t there were many times when Beck had no where to throw. Tackling was generally good, and we shut down the run. Most importantly, the defense came up big when it needed to.

This is the kind of game where the Steelers should dominate. 9 trips into opposing territory needs yield more than three points. Remember the hurricane in Miami in 2004? Remember the snow on the day after Christmas in 1999? The Steelers won those games because they were better at smash mouth football.

Likewise, you’ve got to move the chains. How many third down conversions and/or otherwise large gains were negated by penalties? There’s simply no excuse for this.

Which brings me to my point. With 11 games behind us and five more to go, it’s quite apparent that some things may be beyond Mike Tomlin’s ability to control. The Jets and Dolphins have pathetic sack totals, yet seemed to get to Ben Roethlisberger at will. I honestly don’t know who the weak links on the o-line is (or are), but the truth is real improvement might have to wait for the off season.

And while the Steelers woes can generally be tied to the performance of the offensive line (remember 1998, 1999, and 2003 anyone?) there are things that are concrete signs that will reveal how well Tomlin responds to this test.

It’s not abnormal for good teams, even great teams to hit rough patches in the regular season. During both 1995 and 2005 seasons the team looked pretty bad during certain stretches, but both teams made the Super Bowl. We can also point to other years where we started off fast, only to sputter.

Which direction will the 2007 Steelers take?

* The personal animosity between Bill Cowher and the press was real – don’t think for a moment that didn’t doesn’t affect the coverage of Tomlin – but that is another subject for another time.