In February 2008, Steelers Nation lost a definitive voice with the death of Myron Cope, Terrible Towel inventor and legendary voice of the Pittsburgh Steelers. No Steeler summed up Cope’s legacy better than Art Rooney II when he explained that “Myron Cope brought the Steelers closer to the fans.” Myron Cope was, as Sports Illustrated, opined in 1992, “the soul of the Pittsburgh Steelers.” 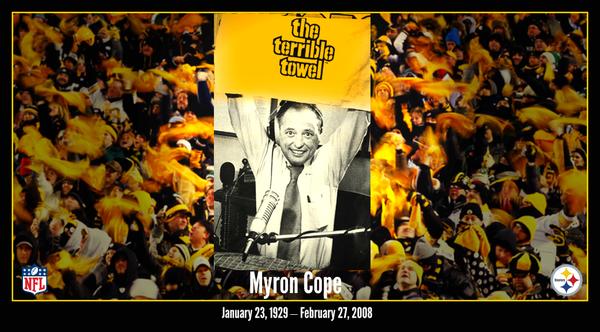 In an age when sports broadcasting is increasingly defined by either former athletes who are there by virtue of their names or professionals who excel in their drive to be vanilla, Myron Cope brought a new meaning the term “color commentator.”

Growing up in Maryland, my exposure to Myron Cope did not come until the 1987 season’s final contest. Sitting on an 8-6 record, Pittsburgh needed only to beat the “Cleve Brownies” at home to clinch a playoff berth in that strike shortened season.

The Steelers went on to lose that game 21 years ago, but I remember Myron Cope’s accounts of the second half as vividly as if they’d happened yesterday. When Brian Hinkle went down “ooh, that hurts, that hurts!” Later, Jack Fleming spotted one of the team captains jumping up and down after a disputed call Cope interjected “is it for joy or for anger? Fleming, is he jumping joy or for anger?!”

Up to that point 95% of my experience with football on the radio had come from listening WMAL’s Redskins broadcast team of Sonny, Sam, Frank, and Huff. While those guys bled red and yellow just as profusely as Myron bled Black and Gold, an important difference was apparent:

In fact, in his book Double Yoi, Myron Cope made a point of saying that, as opposed to his writing, he did not take broadcasting seriously at all. Case in point, writing about creating the Terrible Towel in Steelers Digest, he said he’d been asked to come up with a gimmick, and “I am a gimmicly kind of guy.” (Interestingly enough, this account conflicts with recently published accounts.)

Yet Myron never let his antics interfere with his insights into the game. I remember an outbound PA Turnpike trip as the Steelers played the Vikings in the third game of the 1989 season. Myron Cope, true to form, came out with gems like, “and there’s Mike Mularkey arguing with the Minny Vike defender saying ‘now don’t you give me any of that mularkey….”

He invented the Terrible Towel. In Steelers 1989 draft, Cope coaxed coaches into drafting Carlton Haselrig, a college wrestler who never even played football. Haselrig made the 1992 Pro Bowl as a guard. In 1992, late in a Sunday Night Match up against the Chiefs, Cope realized that Barry Foster was sitting on the bench only a few yards shy of a 100. He pounded on the glass of the press box to make the assistant coaches next to him aware of this. Foster got his 100.

Whether it was with his Christmas songs, nick names like “Drac Lambert,” or “the Bus,” the enthusiasm Myron Cope shared with fans was contagious. He brought a vivid tone and texture to football games that took on a life of its own, at least in Steelers Nation.