The Steel Curtain Has Risen Again!

The 2008 Super Bowl Champion Pittsburgh Steelers might not enjoy living on the edge, but they are certainly are a team that thrives on it. They lived on the edge throughout the 2008 regular season, and they finished the season true to form.

All season long, the Steelers treaded Bill Cowher’s oft cited “fine line between winning and losing,” and most often they came out on the right side.

Credit the Washington Post’s Michael Wilbon for being clairvoyant. He openly vacillated in his annual Super Bowl prediction column, ultimately concluding that the Steelers would “win 21-20, on the strength of a sack-strip-fumble recover in the final 90 seconds.” You can’t get much closer than that. Super Bowl XLIII will be remembered for a long, long time.

Super Bowl XLIII One for the Ages

Super Bowl XLIII was one for the ages. It had everything one could ask for:

In the end, only one team was going to come out on top, and the Pittsburgh Steelers prevailed, but only after pushing the faithful in Steelers Nation to the edge of a collective heart attack.

In a game that was so evenly matched, what made the difference?

The scoreboard doesn’t really indicate how close the Steelers came to thoroughly dominating the first three quarters. The score was 20-7 entering the fourth, but easily could have been 28 to 7 had the Steelers been able to punch it in during their three goal line situations.

The Steelers not only had to settle for field goals instead of touchdowns, but the Cardinal’s defense made the adjustments they needed to make to prevent the Steelers from running the ball, and thereby controling the clock, during the second half. In the same vein, the offensive line, which had protected Ben so well in the first half, saw its pass coverage become leaky.

But you never would have known it watching the Steelers on the sidelines or in between snaps.

Mike Tomlin has a different style than Bill Cowher but this year he has certainly succeeded in establishing a “there’s no ‘I’ in the team” mentality.

And that was the difference in this game.

Both teams have All Stars, and perhaps legitimate Hall of Famers. And as these caliber players are wont to do in big games, they delivered. James Harrison, Ben Roethlisberger, and Santonio Holmes (and perhaps LaMarr Woodley) all have a legitimate claim on the MVP trophy.

Mike Tomlin, Dick LeBeau and yes, Bruce Arians, had an excellent game plan that their players executed almost flawlessly in the first half, but Ken Whisenhunt, Russ Grimm, Todd Haley and their defensive staff adjusted well enough in the second half to take the lead with less than three minutes to go in Super Bowl XLIII.

But the Steelers came out on top because they held their poise and hung together.

Santoino Holmes could have actually caught Ben’s first pass in the endzone on the last drive. It slipped through his fingers.

On the drive that preceded Arizona’s first fourth quarter touchdown, the Steelers forced a 3 and out. As Kurt Warner walked off the field the cameras flashed to the world an image of an upset quarterback who was yelling in anger.

After Larry Fitzgerald burned Ike Taylor and the rest of the Steelers secondary to put the Cardinals on top, Ben simply turned around and strapped on his helmet – he was ready to play.

All of this is superficial, of course, and it would be far too much of a stretch to say that Ben was more well prepared mentally to play than Warner, who had a fabulous game. 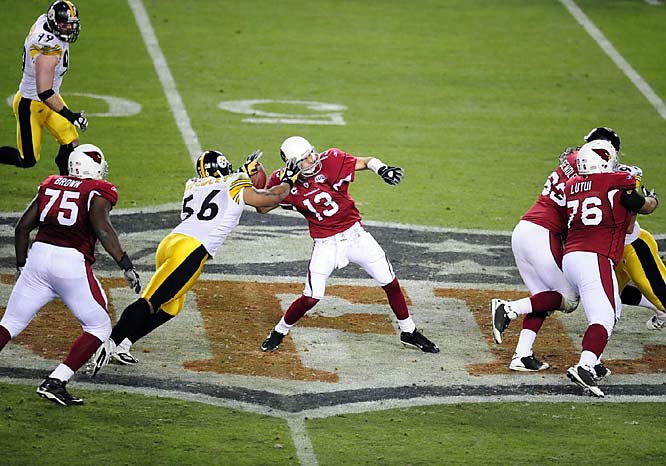 But considering the context, in the waning moments of the Super Bowl the contrast cannot be sharper.

Neither team’s execution on either side of the ball was consistent for four quarters. Both teams’ offensive units made history-making plays and their defenses made heroic goaline stands, but both teams’ units had some pretty large lapses mixed in between.

But the Steelers poise and camaraderie were consistent for four quarters. The men in Black and Gold never lost their belief in themselves nor their faith in one another. When faced with adversity, they persevered, they remained determined. And they did it together. That’s been the case all season.

And that’s why the 2008 Pittsburgh Steelers are Super Bowl Champions.

Thanks for reading Steel Curtain Rising.  Share you your thoughts and memories.