How do you summarize a legend’s life in a single article? Steelers Nation’s scribes faced just such a dilemma with the passing of Chuck Noll.

How to tell the story of someone so accomplished, yet so humble; at once intelligent but unassuming; demanding while soft spoken; so devoted to singleness of purpose yet dedicated to a variety of pursuits.

How else to explain a an who sits among the greatest NFL coaches yet is frequently forgotten when “The Greatest” conversation starts because he actively deflected credit for himself? Preparedness was Pittsburgh’s calling card under Noll. So how do you explain how he was home for dinner every night while his contemporaries slept on couches in their offices?

It is a daunting task. To perhaps the key to decrypting the cryptic Chuck Noll it is best to start with the “exceptions,” or moments where he departed from the script. Click on the links below to see how those “off script moments” formed the foundations of Noll’s defining moments with the Steelers.

1. “Losing has nothing to do with geography.”
2. “They think the just won the God damn Super Bowl.”
3. “Go for the big one.”
4. “Sidney Thornton’s problems are great, and they are many.” – The Emperor in Winter
5. “Potentially, we have a good team.” – The Emperor’s Lash Hurrah
6. “Time to smell the flowers….”But first….
7. The Emperor Is Dead – Long Live Steelers Nation 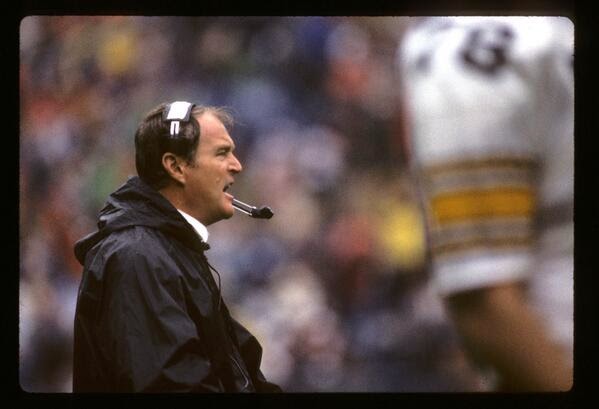 When you think of “Attitude” and “Steelers” you usually think of a young Joe Greene tossing the ball into the stands in frustration, or Greg Lloyd’s “Just plain nasty,” or perhaps Joey Porter calling out Ray Lewis.

Except he wasn’t. Of Chuck Noll’s many contributions to the Steelers, perhaps his most important was attitude. And he made it on his very first day as Pittsburgh Steelers head coach. When asked about taking over a Pittsburgh team that had excelled at losing  40 years, Noll’s response was a concise as it was penetrating.

With a single statement, Noll erased four decades of mindset. The team’s bad habit of trading away draft picks had ended. Noll pledged to Dan Rooney to build the team up from the ground, to replace those players not good enough, and even dared to remake Pro Bowlers such as Andy Russell in his own image.

Make no mistake about it, a lot of things changed in Pittsburgh when Noll arrived, but it all began with a change in attitude.
Back to Top

“They think the just won the God damn Super Bowl.”

Noll didn’t do pep talks, ala Vince Lombardi or Bill Cowher. He didn’t go out for emotional hand holding the way Joe Gibbs would. Nor did he attempt to belittle his player’s with barrages of criticism like Bill Parcells.

You were playing professional football, and that should serve as motivation enough. Yet perhaps his best off script moment came before the 1974 AFC Championship game. This story made it into almost every Chuck Noll obituary.

The Oakland Raiders had defeated the Dolphins, and afterwards John Madden exclaimed that, it was a great day in football when the two best teams played and it was a shame one of them had to lose.

As Ray Mansfield recounted, Noll walked into the Steelers locker room the next morning fuming, “They think the just won the God Damn Super Bowl. But let me tell you something, the best football team is sitting here right in front of me.”

Dwight White remarked, “It was like getting a blessing to go out and beat up on someone.” Andy Russell later recalled, Joe Greene stood up and proclaimed, “I am ready to play right now.” For his own part, Joe Greene said that was the one game that he entered where he knew he was going to win.

The Steelers ended the half tied, after the referee had disallowed a John Stallworth touchdown. Nonplussed, the team filed off into the locker room, with no frustrations evident. Nor did panic set in when Oakland took a 10-3 lead into the fourth quarter. Lynn Swann scored one touchdown while Franco Harris rumbled for 2 more.

Noll’s stoicism was no act, yet The Emperor was savvy enough to know when to press buttons.
Back to Top

Football, Noll repeat time and time again, was about blocking and tackling. While his contemporary Chuck Knox was known as “Ground Chuck,” Noll could have just as easily earned that nickname.

But the Steelers became victims of their own success on the other side of the ball, and that prompted another off script move by The Emperor.

Mel Blount simply covered receivers too well. The NFL never has nor never will see another more physically intimidating cornerback. The NFL took notice, and took notice of the fact that TV Ratings and passing go hand in hand, and enacted the “Mel Blount Rule” making it harder to cover receivers downfield.

Noll however, transformed advantage into disadvantage, by unleashing Terry Bradshaw’s arm and making full use of the talents of Swann, Stallworth, and Bennie Cunningham. Yes, the Steelers still ran. Franco Harris, Rocky Bleier and Sidney Thornton rushed for a combined 4184 yards in 1978 and 1979.

A year later, with the Steelers trailing in the 4th quarter of Super Bowl XIV, on third down at their own 27 Noll ordered Bradshaw to “Go for the big one” calling “60-Prevent-Slot-Hook-And-Go.”

The play hadn’t worked all week in practice, and Noll had relentlessly preached that if you couldn’t perform in practice, you’d fail on Sundays. Again, Noll knew when to make exceptions to his own rules – and 73 yards later John Stallworth put the Steelers ahead with a touchdown.

“Sidney Thornton’s problems are great, and they are many.” – The Emperor in Winter

Had Noll retired after Super Bowl XIV the national press would have had no choice to accept Chuck Noll as the greatest coach of the modern era. But he didn’t retire, and instead coached the Steelers through a decade were they barely topped .500.

In 1969, Noll had no only committed the Steelers to building through the draft, but committed them ed to taking the best player available, regardless of race, school, position, or who was currently on the roster.

Bucking the rest of the NFL, Noll insisted on colorblind drafting, and with Bill Nunn’s guidance aggressively scouted the Historic Black Colleges. Terry Hanratty had been high second round pick in 1969, yet Noll didn’t hesitate at taking Bradshaw at number one in 1970. Frank Lewis and Ron Shanklin were good receivers for the Steelers in 1973, but Noll drafted to great ones in 1974. And so on.

Instead of taking the best player on the board, the Steelers would try to project guys who fell for one reason or another and who they thought would better fill roster holes. The decision was a disaster. As the 80’s arrived the oldest of Noll’s players reached retirement, and their replacements were lacking.

Sidney Thornton, a second round draft pick in 1977 who could have been Franco Harris’ heir apparent, once so frustrated Noll with his off the field antics, which included treating cuts with urine, that he remarked “Sidney Thornton’s problems are great, and they are many.”

Other factors contributed to the Steelers poor drafting and subsequent struggles in the 80’s, but getting away from their bread and butter was the most prominent.

“Potentially, we have a good team.” – The Emperor’s Lash Hurrah

Telling and retelling the 1989 Steelers story is a labor of love at Steel Curtain Rising and need not be repeated in detail here. Yet, for those unfamiliar, it may have been Noll’s finest coaching job.

In 1988 the Steelers had finished 5-11, their worst since 1971, and for the first time ever, Noll had been forced to fire assistants. Nonetheless, Noll convened training camp by saying, “Potentially, we have a good team.”

Afterwards, Noll quipped “Either we just played the best two teams in football, or we’re in for a long year.” As, I believe it was Gene Collier recalled on the day of Noll’s retirement, “The once unthinkable question was on everyone’s lips. And it wasn’t ‘Will Dan Rooney fire Chuck Noll’ but ‘How long will he wait?’”

Yet, he did something better, as Behind the Steel Curtain’s Michael Bean documented with Merril Hoge back in 2010:

He revisited the things that were going on in the media about us. And if I remember right, he kind of wrote some things up on the board, showed us some clips. Then he stood in front of us, paused for a second and said, ‘I believe in you.’

Hoge says that the hair still stands up on his arm when he remembers that statement. As well it should, the team rebounded to make the playoffs, upset the Oilers in the Astrodome, and came within a bad snap of doing it again vs. Denver.

“Time to smell the flowers….”But first….

When the ’89 Steelers  season ended, Noll commented “This team is on the way up. He doubled down during the off season, talking about the “Championship caliber” talent his team had.

However, history also vindicated Noll when he decided it was time to “smell the flowers,” as he declared the day he retired.

Noll’s final game took place at Three Rivers Stadium on December 22, 1991 vs. the Cleveland Browns, and the Steelers won 17-10 in a game that wasn’t as close as the score indicated. Not only did Noll win his final game, but in doing so he defeated Bill Belichick the man who 23 years later was still trying to tie his record of Super Bowls…. 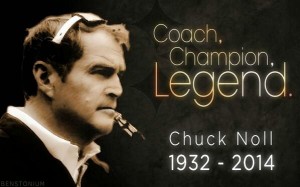 When NFL Films asked him to reflect on his time with the Steelers of the ‘70’s, Chuck Noll simply said, “It was fun. It really was fun.”

The Emperor is Dead, but Long Live the Steelers Nation he founded!