A year ago the Steelers made their “final cuts” and immediately hit the wavier wire signing Zoltan Mesko, Cody Wallace and Antwon Blake. The move was highly uncharacteristic for the Steelers, and smelled of desperation, but with two out of the three players returning in 2014 it looks Kevin Colbert’s bargain hunting worked out.

Many expected the Steelers to make additional moves after getting down to 53, but it looks like they’re standing pat.

With that, let’s have a look at the Pittsburgh Steelers 2014 Roster

Landry Jones was on the bubble, and many expected him to be either relegated to the practice squad or simply cut. Some quick research on ESPN shows Brian St. Pierre having a better sophomore preaseason than Jones. Just say’n….

This is one of the smallest opening day squads of running backs in recent memory. It was only 2010 that the Steelers opened with Mendenhall, Dwyer, Redman, Moore, and Johnson. But times change, and this is a passing man’s league.

My what a difference one year makes. A year ago the Steelers number 1 and 2 tight ends were David Johnson and David Paulson, with Kelvin Beachum working as a third TE. Palmer shows remarkable resilience after arriving as an injury replacement.

Let’s hope the talk that Guy Wimper was legitimately giving Adams a run for the third tackle slot was simply a Mike Munchak motivationally ploy. 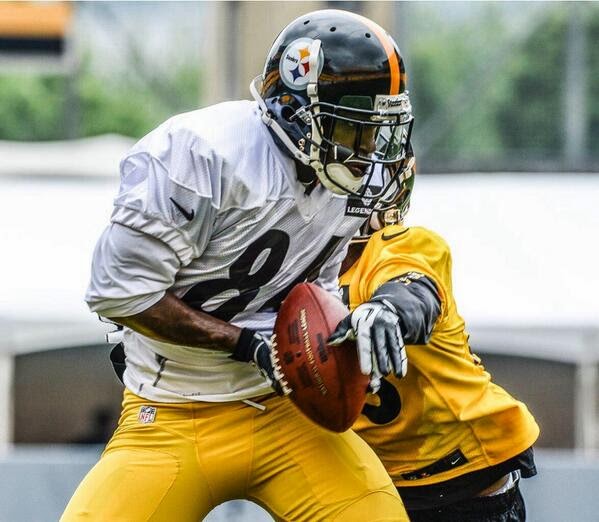 Brown is a proven commodity. He’s also the only one to step on the field for the Steelers. Let’s hope Ben is in sync with his wideouts.

The word from Johnny Mitchell is that Steve McLendon needs to focus on being Steve McLendon and not Casey Hampton. Let’s hope he’s right. McCullers intrigued in training camp and preseason, and if a kid this shows that he really can learn his craft, watch out.

On paper, a solid mix of the old, new, now and in between.

In one year, this position swings from being the Steelers weakest, to its deepest. Garvin is also doubling as a backup outside – on paper at least.

The outside linebackers have long been the mainstay of the Steelers 3-4 zone blitz defense. Jones needs to make the year two leap, and Jason Worilds needs to both stay healthy and show he’s worth the money he wants to make. Depth is exceptionally thin.

All of the pundits both outside and inside Pittsburgh expected the Steelers to devote considerable resources to upgrading here. Instead, they got Brice McClain. The Steelers need the proverbial “One more year” out of Taylor.

Perhaps the deepest the Steelers have ever been at this position. The Steelers need Mitchell to deliver, while they also need to work Thomas onto the field. Needless to say, when Dan Rooney prays his Rosary, he should include a special intention for Polamalu’s health.

Suisham had a shaky preseason, which is not encouraging. Brad Wing won the punting job by default – sure, punting might not correlate to Lombardi’s, but a solid punter can wall paper over a lot of deficiencies on either offense or defense. Greg Warren is apparently healthy, which is good as he’s got to do one thing, and historically he’s done it well.