September 7th 2014 was not only the date of the Pittsburgh Steelers home opener vs. the Cleveland Browns but, thanks to the United States Senate, also Chuck Noll Day. Noll of course played in Cleveland for the legendary Paul Brown before becoming a legend in his own right in Pittsburgh.

It was a roller coaster ride where Steelers Nation experienced euphoria and despair in equal if uneven parts.

First Half Unfolds as If Scripted by Scribe in Steelers Nation

The Steelers and Browns opened by exchanging field goals, and in spite of long-distance hook ups from Ben Roethlisberger to Antonio Brown and Brian Hoyer to Jordan Cameron, the difficulties the two teams encountered in between the 20’s seemed to signal a low-scoring affair.

This was one of them. 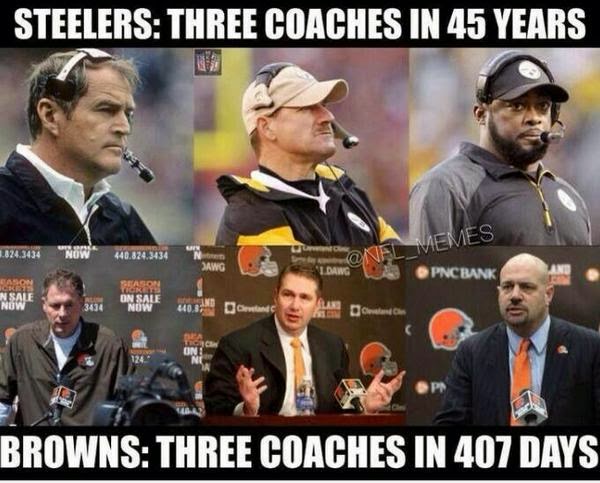 Steelers Nation has heard much but seen little of Markus Wheaton since the 2013 NFL Draft; today we got to see why coaches raved about him, as Wheaton made an incredibly athletic catch to pull down another 40 bomb from Big Ben that set up LeGarrette Blount’s first touchdown.

After Cleveland picked off ill-advised Roethlisberger pass, Jarvis Jones made them pay, by sacking Hoyer for a ten year loss and ultimately preventing them from converting the turnover into any points.

After that it was Roethlisberger to Brown who abused Joe Hayden on a 35 yard touchdown pass. A three and out later and Le’Veon Bell was prancing through the Brown’s secondary for a 38 yard touchdown.

Everything was going right for the Black and Gold, down to the workman-like 10 play drive that ended in a Shaun Suisham field goal to end the first half 27-3. The question for the Steelers heading into the second half, wasn’t would Bruce Gradkowski play in the second half, but how long would Mike Tomlin wait to put him in….

2nd Half – A Waking Dream Transformed into a Nightmare

….There’s a reason why Gradkowski’s backing up Roethlisberger, and that’s because Brian Hoyer was no longer available. Hoyer spent time on the Steelers roster in 2012 when Big Ben and Byron Leftwich were injured, and the Steelers wanted him back.

Now we know what Kevin Colbert and Mike Tomlin saw in the young man. Where he’d been hapless and inaccurate in the first half, he was decisive and precise in the second half as he led the Browns on two scoring drives which immediately brought them back into the game.

Joe Starkey summed it up best:

On offense the Browns were moving – and scoring, at will. On defense Ben Roethlisberger saw his protection disappear and daylight for Bell disappeared. About the only positive of the first 20-22 minutes of the second half for the Steelers was that they discovered that Brad Wing’s a serviceable punter.

Were that only the case. Over confidence would be difficult to excuse but simpler to fix. No, the unfortunate reality is that the Cleveland Browns gave the Steelers a taste of their own medicine with the no huddle. Pittsburgh had no answer, but John Steigerwald made a chilling observation:

And so it was, with 11:15 left to play, the Steelers found themselves tied in a game they’d once led by 21 points…

Steelers, Brown Duel at Self Destruction

Tied 27-27 with just over ten minutes left, the game was there for the taking. But instead of reaching out and grabbing it, the Steelers and Browns seemed intent on vying to see who could do the most to lose it.

The Browns responded by marching from their own 6 to the Steelers 35 where they threw two incompletes, and then committed two pre-snap penalties in punt formation before finally kicking.

The Steelers answered smartly, moving to Cleveland’s 41, where on third and one the Brown physically manhandled the Steelers offensive line stopping Blount for a 4 yard loss.

With 1:53 left and the ball at their own 20, the Browns had a reasonable shot at winning it, but it was here that their big game inexperience grabbed them by the throat. Cameron Heyward did what players of his caliber do. He stepped up with a sack knocking Cleveland to the 14.

Cleveland did neither, and the Steelers forced a punt. Pittsburgh started at its own 43, but Ben Roethlisberger only needed 3 passes, 1 to Bell and two more to Markus Wheaton to get into field goal position. Shaun Suisham did what he’s done 8 times before – kick a game winner with time expiring.

The Steelers walked out of a season opener with a win for the first time in three years, which is a plus. But the topsy-turvy way shows that this team has a lot to work on.